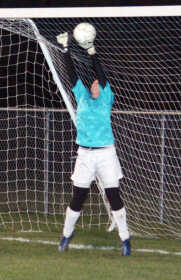 Greencastle keeper Jennifer Grumme extends to make a save during the first half of Wednesday's match up with Center Grove.

MOORESVILLE -- The Greencastle girls' soccer team traveled to the Mooresville Regional with one thing on their mind -- avenging last year's loss. For a half it looked like that could become a reality, but an onslaught of Trojan offense put the game out of reach as the Tiger Cubs lost 5-1 Wednesday.

The defeat came not from a lack of effort. Greencastle attacked from the beginning, but a seasoned Center Grove squad seemed to anticipate their every move.

"It was a good effort," GHS head coach Maurice McKee said. "It wasn't quite where we wanted to be We knew it was going to be a tough game coming in and we were going to have to play really hard to get there. The girls played hard, but a lot of our touches were not on tonight and -- I guess it just wasn't meant to be tonight is what it amounts to.

"We thought we were ready and we had some moments where we probably should have had some scores, but it just didn't quite come together. I guess that's why we're going home," McKee commented.

In the first half of Wednesday's game, Greencastle was outshot 10-1 and only allowed one goal to be put on the board. Center Grove's score came at the 28-minute mark when Brooke Piercefield slid a shot past Greencastle keeper Jennifer Grumme.

Grumme came back to make a great save with 17:16 on the clock, deflecting a Trojan kick wide. Greencastle looked as if it would tie the game when Hannah Spencer broke through the Trojan defense, but her kick rolled wide right as Center Grove breathed a collective sigh of relief.

Grumme again rose to the occasion with two seconds left and the teams went to the half with the score 1-0 in favor of Center Grove.

Center Grove took to the pitch in the second half and pressured the Tiger Cubs relentlessly. They put their first score of the second half up when Mackenzie Lenahan rocketed a shot in with 33:22 on the clock. Ali McCarty added another goal at the 27:28 mark, then Shay Sutton fired a shot over the outstretched hands of Grumme to give Center Grove a 4-0 advantage.

Greencastle's refusal to quit finally paid off with 7:42 remaining. They pushed the ball deep and Hannah Deer ripped a shot toward goal, but it was Hannah Spencer that got the ball on the rebound and blew a shot past Sarah Patterson for the Tiger Cubs' lone goal. Spencer had another chance at scoring with 2:41 left, but her shot rocked the crossbar and the Trojans cleared the ball. Center Grove added another goal to bring the score to its final tally of 5-1. 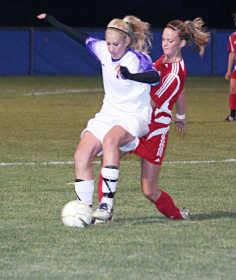 GHS junior Kate Babington controls the ball with a Center Grove player on her back in Wednesday's contest. The Tiger Cubs lost to the Trojans 5-1 in the Mooresville Regional.

Greencastle's passing was off on the night which resulted in the Tiger Cubs not being able to set into a rhythm and get their offense going. Center Grove seemed to foresee each GHS move before they made it and that was the difference maker in Wednesday's contest.

"We played better against Terre Haute South, I think," McKee said. "We played a different game. They knew they needed to play a short passing game and we just couldn't put it all together tonight to get the short passes in to make it all happen. Our passing game needed to be better. When you turn and pass the ball and they're on it already; you know we didn't pass it to the right place.

The Tiger Cubs bid farewell to seniors Spencer, Grumme, Hannah Serlin and Becky Grivas, all of whom have been intricate components to the success of the Tiger Cubs.