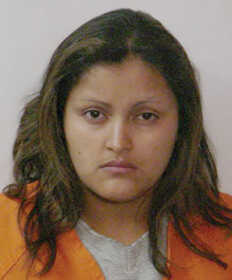 Elizabeth Talamantes, 25, of Albuquerque is charged with Class C felony conspiracy to commit dealing in marijuana over 10 pounds and possession of marijuana, identity deception and neglect of a dependent, all Class D felonies. If convicted on all charges, she could be sentenced to 17 years in prison.

According to a narrative prepared by Deputy Craig Sibbett of the Putnam County Sheriff's Department, Sibbett observed a gray Jeep with "very heavy window tint" pass him while he was stationary on I-70 eastbound at the 35 mile marker at 4:31 a.m. on March 16.

Sibbett began to follow the vehicle, which slowed down and began to impede traffic. Sibbett stopped the vehicle just off the 41 exit ramp, court documents said.

Sibbett observed a Hispanic female driver, one young hispanic male in the front passenger seat and two Hispanic males in the back of the Jeep under a blanket.

The driver told Sibbett she did not have a driver's license in her possession, but that she did have a warning ticket from a traffic stop in Texas. Sibbett put the woman in the front seat of his police cruiser.

The ticket from Texas bore the name Venus Iliana Martinez. The driver told Sibbett that was her name, and that she was on her way to Indianapolis from Albuquerque for her uncle's funeral. She said the two young males in the Jeep were her nephews and the passenger was her boyfriend.

Sibbett then spoke to the front seat passenger, who told him he and the driver were on their way to Indianapolis to visit relatives.

"During my interaction with the female subject, I noticed that she was overly talkative, and appeared to be extremely nervous and fidgety," Sibbett said in his narrative. "Due to my training and experience, I know that inconsistencies in travel itinerary are an indicator of criminal activity. I also felt that the overly nervous behavior exhibited by the driver, who was coming from a source area for narcotics, could mean that she had narcotics in her vehicle."

Shortly thereafter, officers began a hand search of the vehicle and a K-9 officer was brought in. The dog indicated there was an odor of narcotics coming from a spare tire that had been removed from the Jeep.

At that point, court documents said, the driver told officers she had lied about her identity and that accurate identifying documents could be found hidden in the headliner of the Jeep's passenger side.

The driver then told officers the spare tire was filled with narcotics -- approximately 40 pounds of marijuana. She said she was delivering the narcotics for another male that was traveling to Indianapolis, court documents said.

On March 17, a representative from Putnam County Children's Protective Services contacted Sibbett and told him she had been in contact with relatives of the two backseat passengers in the Jeep -- both minor children -- who told her the driver was not Jessica Marquez, but Elizabeth Talamantes.

Sibbett went to the Putnam County Jail to see the woman, who signed a form "Jessica Marquez." Sibbett confronted her about the identity fraud, and for several minutes the woman insisted she was Jessica Marquez before admitting she was Elizabeth Talamantes.

"She stated that she had lied about her identity because she is in the country illegally and she did not want to lose her child," Sibbett said.

On March 18, Talamantes' bond was set at $30,000 cash only. Her bond was reduced to $30,000 with 10 percent allowed on April 10. Talamantes posted bond and was allowed to return to New Mexico after signing a waiver of extradition.

Talamantes' attorney asked for a continuance for a May 15 pre-trial conference, which was denied. Talamantes was excused from attending that conference.

A change of plea and sentencing hearing was set for Thursday. Talamantes failed to appear, and a warrant was issued for her arrest. Talamantes' attorney, Jeffrey Boggess, filed to have his client's warrant recalled. That request was granted on Friday, and a new sentencing date of Nov. 6 was sent.