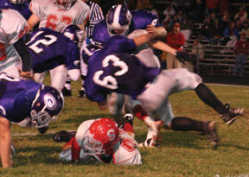 The fourth quarter of Greencastle's sectional game with Southmont at Harbison Stadium Friday night had enough twists and turns for half a season.

With the two teams entering the quarter tied at 14, there were three fumbles, two interceptions, a blocked punt and a touchdown.

The score sent GHS home for the year and propelled Southmont into a second round matchup with Western Boone.

In the first half, the game was basically a battle of field position. The first quarter was played primarily in Tiger Cub territory, and the Mounties finally took advantage late in the quarter.

Following a GHS punt from their own end zone, Southmont took possession at the Tiger Cub 33-yard line with 4:02 to play. After keeping the ball on the ground for four plays, the Mounties took a 6-0 lead when quarterback Logan Petry hit Jordan Burkett for a 22-yard touchdown.

The score seemed to wake up the Tiger Cubs, though. Taking possession late in the first, they began a scoring drive at their own 36. Splitting carries between Ashton Marshall and Patrick Richardson, they marched down the field. Another key play came from Kyle Nobles on a 12-yard reception from Jordan Hickam.

Marshall broke through for the first GHS score, though. Following Hickam on an option play, he took a pitch from the quarterback about 10 yards down field and sprinted the rest of the way for the 20-yard score.

Buzz Deer's extra point knotted the game at seven with 10:40 to play in the half.

The Tiger Cub defense controlled the Mounties in the second quarter, allowing just 15 yards rushing and 25 yards passing in the period. Southmont's first two possessions of the quarter ended in punts.

Winning the field position game, GHS was once again in good position late in the half when it took over possession at the Mountie 47. Picking up three first downs on the way, Greencastle went 47 yards in 10 plays, with Hickam running the final four yards for the go-ahead score.

Unfortunately for the Cubs, that would be the last time their offense was clicking all night.

Asked the difference in the first and second halves, GHS coach Mike Meyer saw a number of factors.

"It was turnovers. We struggled to move the ball. The defense was on the field too long," Meyer said. "We were real inconsistent."

The second half opened in a similar manner to the first, with both teams trading punts.

However, Southmont began to find its rhythm thereafter.

On their next possession, the Mounties put together the best drive by either team all evening. They took the ball at their own 20 and began running for big chunks of yards. After scrambling for a first down, Petry went down and had to come out of the game. 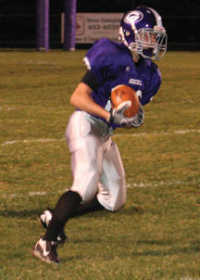 While the offense picked up a first down in his absence, the junior came back at a key moment in the game. With his team facing a fourth-and-12 from the Greencastle 32, Petry dropped back and found Tanner Hill in the middle of the field for a 32-yard touchdown strike.

The Mounties had tied the score at 14 with 3:25 remaining in the third.

Late in the third quarter, the rain started to fall and the game became a roller coaster. On Greencastle's ensuing possession, Hickam scrambled for a first down, but threw an interception to Petry two plays later.

Taking over at their own 41, the Mounties put together a nice drive. They fumbled early in the period, but recovered the ball for a six-yard loss. Three plays later, the GHS defense rose up, hurrying Petry for an incompletion and a turnover on downs inside the red zone.

But Greencastle turned the ball right back over, this time on a Burkett interception of Hickam at the 42-yard line.

Likewise, though, Southmont could do nothing with its great field position. After being thrown for losses, they were forced to punt.

After a bad snap, Greencastle's Jacob Wright was able to get a hand on the Petry punt, leaving Southmont with a net loss of two yards on the punt.

GHS had its first good field position of the half, taking the ball at the Mountie 38. The rain was falling harder, though, and the fumble bug finally bit the Tiger Cubs. On the second play of the drive, Richardson ran for a five-yard gain, but the ball squirted away, and the Mounties jumped on it.

Once again, Southmont looked like it would score on its next drive. They took the ball from their own 28 to the Greencastle 12 in just five plays, but then committed a red zone turnover.

This time, Micah Hatch put the ball on the ground inside the GHS 10.

After another Tiger Cub punt, Southmont finally took possession on the decisive drive. They scored in two plays, as Burkett ran the final 23 yards for the decisive score.

Greencastle had one last shot, but with 72 yards to the end zone and a passing game that had been anemic all night, the chances were slim.

After a Hickam sack and a pair of scrambles, the junior aired it out on third-and-11. The ball landed in the arms of freshman Mountie defender Austin Burton, sealing the win for Southmont.

Having watched his team struggle to just 39 second-half yards while committing four turnovers, Meyer tipped his cap to the staff across the field.

The coach reflected on a season that saw his team open 1-3 before winning four of the last five regular season games.

"We had a lousy started. We finished strong but unfortunately we came up short today," Meyer concluded.