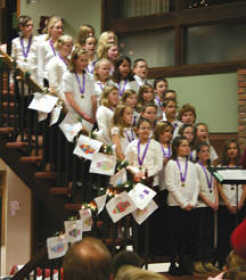 The 25th Annual Lights of Love presented by the Greencastle Civic League was once again a delightful program kicking off the Christmas season in the city of Greencastle.

Mayor Sue Murray welcomed county residents and thanked the Civic League for all they do.

"They take an active role in making us be the best we can be," said Murray.

Cathryn Ensley, Chairman of the Lights of Love program, presented contest winners from the local community schools. The top three winners in grades 3-5 and 7 and 8 read their award-winning essays to the group gathered. Kindergarten, first and second grade winners showed off their art.

The TZ After School Enrichment Choir performed under the direction of Kathryn Dory and Geoff Price.

Everyone headed outside to watch the top three winners light the new Christmas tree planted on the corner of City Hall.

Isaac Deal's words from his essay may have best summed up the evening.

"We may not be rich in money but we are rich in love. I'm thankful for that," he said in his essay.

The Lights of Love committee members this year are Cathryn Ensley, Margo Hertenstein and Laura Brentlinger.