Warriors too much for South Putnam 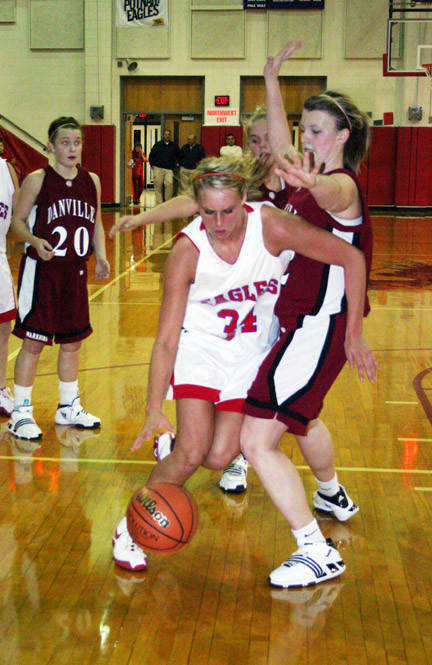 Freshman Brooke Boetjer goes aorund a Danville defender during the second half of Tuesday's contest. The Eagles fell to the Warriors 53-46.
Order this photo

The South Putnam girls' basketball team overcame a tough first half to give Danville a run for their money Tuesday night. The Eagles soared back in the second half before falling to the Warriors 53-46 to move to 3-3 on the season.

The Eagles had a plan and came out and executed it from the very beginning. They looked to seize control under the basket by sending Danville's tallest player to the bench.

"I have to give our kids credit, our game plan going in was to pound the ball inside to get Amy Kramer out of the game, because she was going to change the game one way or the other," Eagles head coach Debbie Steffy said. "We felt like we had the advantage in the post if we could get her out."

The force the Eagles had little answer for was Liz Scott. Scott scored 11 points in the first half to lead the Warriors.

South held close to Danville, ending the first quarter down just six, but the beginning of the second quarter was a different story. South watched as the Warriors jump out to a 22-7 lead and ended the half down 26-15. The Eagles went 5-of-19 from the floor in the half and 2-of-6 from the free throw line.

"I felt like there was stretch there at the end of the first, beginning of the second where it was a close ball game," Steffy commented. "Then all of a sudden you look up at the scoreboard and it's 7-22. That was the deciding factor right there. You look from that point on and we played them pretty even the rest of the way."

In the third quarter, South again hung tough and when the fourth quarter horn sounded, they caught fire.

South Putnam outscored Danville 20-12, but the first half hole was too much to dig out of. Oceaia Boetjer led all scorers with 19 points, including three three-pointers. Freshman Jenny Thompson followed with 10 points, with Brooke Boetjer adding seven, Emily Dabkowski five, Kelsey Searles four and Leeah Butts one point.

Scott led Danville with 18 points, but Steffy thought her team defended the senior well. Even though she got her points, the Eagles forced her into some bad shots and overall kept her contained. Steffy thought the key to the game for Danville was the play of sophomore Taryn Collier.

"I thought we did a pretty good job of getting out on Liz Scott. We let her loose a few time and she hit some big shots. I thought the key to the game was the Collier girl. She stepped out on the baseline and when they needed a shot to push the lead, she was right there to hit the shot for them," she said.

Again South Putnam had a team on the floor that was young, but who have been gaining experience game after game. Freshmen accounted for seven fourth quarter points for the Eagles in Tuesday's contest.

"I thought we did a good job there are at the end. They worked hard and they had to do a lot of adjustments on the court because we were running out of timeouts.

"We're coming around and we're getting better and we talked about it before the game," Steffy said. "That's our goal -- to get better every game and I challenged them before the game and asked the 'what are you going to do to make us better tonight?'

"I think they really worked hard at it. I was really proud of the kids tonight -- they played hard," she concluded.

South Putnam will travel to South Vermillion next Tuesday at 6 p.m.

Next game -- South Putnam will travel to South Vermillion next Tuesday at 6 p.m.