Zaring to compete at the World Championships 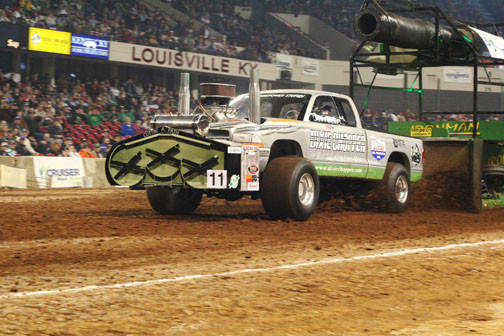 Jake Zaring and the Dixie Chopper pulling truck are making quite a habit of being invited to the World Championship Truck and Tractor Pull.

The 41st annual championship pull is scheduled during the 2009 National Farm Machinery Show Feb. 11-14 at Freedom Hall on the Kentucky State Fairgrounds in Louisville.

For the fourth straight year Zaring and the Dixie Chopper pulling truck are among 15 drivers and trucks from across the nation invited to compete in the pull. A Fillmore area resident, Zaring pulls in the 6,200-lb. 4x4 Modified Truck class. Competition begins at 1 p.m. Saturday, Feb. 14.

Zaring and the Dixie Chopper truck are former world champions, winning the title at Louisville in 2007 during only his second invitation to the big event.

Maneuvering the Dixie Chopper truck to a distance of 234.14 feet, Zaring nipped Rob Foster and Simply Red of Fairgrove, Mich., by a fraction of an inch to take home a share of the total $200,000 in prize money awarded at the 39th annual championship pull.

His first invitation to Louisville in February 2006 came less than a year after Zaring and longtime friend Jim Hilburn (Dixie Chopper after sales manager) debuted their Dodge Dakota creation on the pulling truck circuit. They built the truck in an incredible 51 days in spring 2005.

In his inaugural invitation to the world championship pull, Zaring finished fifth in the 2006 event.

"It's still a dream come true," Zaring said of the invitation to pull at Louisville again.

Co-creator Hilburn is equally excited about the return visit, calling the event "the granddaddy of them all" in the truck-pulling world.

Powered by more than 1,300 horsepower and a Pro-Fab transmission, the Dixie Chopper truck burns seven gallons of alcohol fuel per run. Its distinctive design features blades of grass stenciled along the bottom of each door panel, while the weight box up front has been made to look like the bottom of a 72-inch Dixie Chopper mowing deck.

The National Farm Machinery Show is the world's largest indoor farm show. Dixie Chopper will again have a booth in the Kentucky Exposition Center, displaying its line of zero-turning radius lawn mowers.

Zaring will be competing in the Lucas Oil Pro Pulling Series again this season.