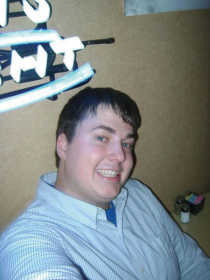 NEW YORK -- A day after taking part in a massive rescue mission that saw more than 150 people pulled from the frigid waters of the Hudson River, DePauw juniors Matthew Nance and Megan Soultz were still a bit shellshocked by their experiences.

The students -- both of whom are interning with DePauw alumnus Dr. John Freese, medical director for the New York City Fire Department (FDNY) -- were among the many medical personnel that responded Thursday afternoon when U.S. Airways Flight 1549 plunged into the Hudson shortly after its takeoff from LaGuardia Airport.

Nance, who hails for Lebanon, is an English literature major. Soultz is studying biology. Both are licensed emergency medical technicians who work for Greencastle's Operation Life.

"We were doing research, and Dr. Freese received a page," Nance said. "He told Megan and I to gather up our things and go with him."

Before leaving for the accident scene, Freese was changing into his firefighter gear. He and the students then got into an ambulance and raced to the Hudson.

"We rode down there with lights and sirens going," Nance said. "We both got really excited.

"When we arrived on the scene, there were a ton of people already there," Nance continued. "There were lights and sirens everywhere, and the dive team was already in the water." 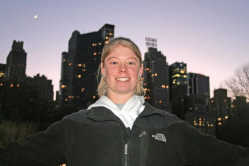 Soultz had never seen anything like the crash site.

"The first emotion for me was shock," she said. "Then the fear started to set in, because we were among the first ones there and the communication hadn't really been set up yet. The plane had already sunk, so there was a little bit of panic in not knowing if everyone had gotten out OK. But once we knew that, the mood was a lot more relaxed."

Once she was in the thick of things at the crash site, Soultz knew she was well outside her comfort zone.

"It was the first major incident I've ever been involved in," she said. "In Putnam County, the biggest thing I've seen is a three- or four-car accident on I-70. I've never seen anything to this extent."

"We were putting blankets on patients and making sure everyone was warm," he said.

Both students were amazed that all the passengers escaped the crash and that no serious injuries were reported.

"I think a broken leg and a broken hand were the most serious injuries," Nance said. "I have no idea how that happened."

"That's very rare," she said. "Some of the news stations here are calling it 'The Miracle on the Hudson.'"

Soultz is pretty set on going to medical school after she finishes up at DePauw, but Nance isn't quite sure where his future will take him. But with his EMT training and his English lit major, he feels he has limitless options.

"I get the best of both worlds, really," Nance said thoughtfully. "I think now that I may want to pursue emergency medicine. I may end up in the medical field altogether now. Being a part of this 150-person rescue that was national news ... it was kind of humbling."

Associated Press reports said the crash happened when the plane, which was bound for Charlotte, N.C., apparently struck a flock of birds, disabling the engines.

Passengers credited the plane's pilot, Chesley B. "Sully" Sullenberger III, with making the emergency landing and saving them from injury or death.