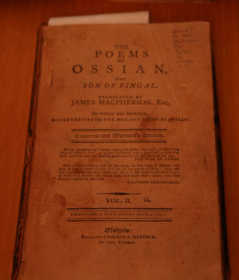 "The Poems of Ossian, The Son of Fingal" appears to have a guardian watching over it. Investigators from Hoosier State Paranormal recorded two electronic voice phenomenas (EVPs) while in the room with the book during a recent paranormal investigation in the DePauw University Library.

On a crystal clear night with outside temperatures hovering around 10 degrees, a group of investigators from Hoosier State Paranormal were carrying heavy electronic equipment across the DePauw Quadrangle. They entered the Roy West Library and headed up to the second floor where a very special book is locked away in the Archives and Special Collections area.

It is part of Governor James Whitcomb's collection that was donated to Asbury (now DePauw) University in the early 1800s. Included in the collection is one book purported to be haunted. Titled, "The Poems of Ossian, The Son of Fingal," it is kept locked away in a special section of the library closed to the public.

For years a story has circulated about a boy who borrowed this book from the library in the 1800s. He became so engrossed reading it that when the library closed he snuck the book out of the library and took it to his room.

It was after midnight when he finished reading and turned out the lights. Later, he woke with a sense of not being alone.

When his eyes became adjusted to the darkness he saw a spectral finger pointing accusingly. Then he heard a voice speaking, "Who stole Ossian?"

A bony hand reached toward the boy, who swore he felt a finger touch his cheek. The boy returned the book first thing in the morning, telling the librarian he'd been visited by the ghost of Governor Whitcomb and promising he'd never take another restricted book out of the library.

On this night the group of paranormal investigators planned to find out if there was any chance that the Governor was guarding his book.

Chris Lien, founder of Hoosier State Paranormal, persuaded Wesley Wilson, Coordinator of Archives and Special Collections at the library, to allow the group to come in to search for the ghost of Governor Whitcomb in the presence of the book.

They were given one hour after the library closed.

Lien says he talked to numerous people who have seen shadows or had odd events occur when they were on the second floor of the library where Whitcomb's book is housed.

Interestingly, Wilson says he has found no documentation of the ghost story before the 1990s.

"I don't know that it means anything. I just have never found anything to document the story before the 1990s," he told the Banner Graphic.

Armed with infrared cameras and thermometers, mini-digital video and audio recorders and EMF detectors, the group hurriedly set up its equipment. 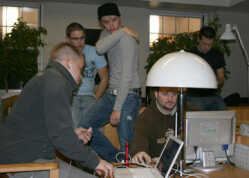 Nate Lein, Justin Woodall, Chris Lien, Daniel Hendry and Mitch Troyer test their equipment as they search for some sign of paranormal activity around tome that is housed in the DePauw Library's Archives and Special Collections.

The lights went out and three of the investigators entered the Archive room. The others remained outside to monitor the recording equipment.

Within a few minutes, a flash of light slid down the computer screen at the end of the table where the book sat.

"Mark that time down," said Nate Lien, who is the audio tech for the group.

Paranormal investigators carefully go back through their audio and video recordings after an investigation.

At one point, they caught temperatures spiking over 15 degrees above their baseline. They ran their thermometers over and over and continued to read the fluctuation.

The temperature fluctuations were not by the Governor's book, but in a back office where a chair built in 1901 by inmates at the Indiana Reformatory sat.

They shot video and used special recorders to try and pick up any voices that can't be heard by the human ear.

The hour passed quickly with the group moving about the room and around the book while asking the Governor to talk to them.

Apparently, they got their wish. Two EVPs were recorded during the investigation.

"Where are you, Mr. Governor?" asked one of the investigators.

"It sounds like a man says 'I've been dead,'" said Chris Lien in a follow-up call to the Banner Graphic.

Lien says he was extremely excited when he found out they had two EVPs. Both are available on the group's Web site www.hoosierstateparanormal.com

The Hoosier State Paranormal group began in November last year. It is made up of 13 members and includes local residents, several DePauw University students and Putnam County Operation Life Emergency Medical Technicians including Matthew Nance and Megan Soultz, who gained local notoriety after participating in the rescue efforts of the jet that crashed into the Hudson River recently.

When asked what got them interested in investigation paranormal activity, Chris Lein explained, "We watched TAPs (The Atlantic Paranormal Society) on television since 2004. We were all interested in what they did and it made us want to try investigating."

TAPS is a one-hour weekly reality show that follows a group of real-life paranormal researchers as it investigates hauntings throughout the country.

Hoosier State Paranormal also investigated a haunted house in South Bend last weekend where the owners have seen black shadows and heard a little girl crying. The results of that investigation should be available on their Web site at www.hoosierstateparanormal.com.

Just in case you were wondering, Governor Whitcomb's book is back in its case, safely locked away out of the public view. As for the ghost of Governor Whitcomb, he did say he would be back.