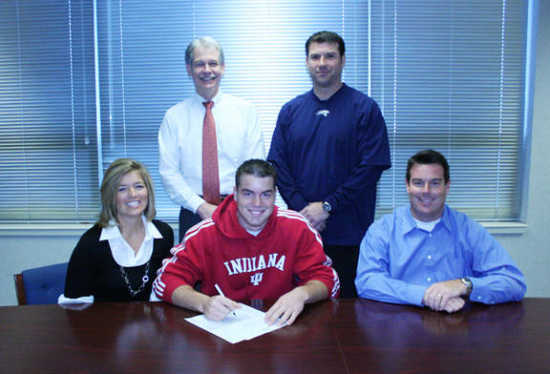 Griffen Dahlstrom (center) signs his letter of intent Wednesday to attend Indiana University in the fall. Next to him were his parents Krista and Ross Dahlstrom, along with North Putnam principal Alan Zerkel and Cougar head coach Greg Barrett.
Order this photo

On Wednesday, North Putnam's Griffen Dahsltrom and Josh Keyt let the world know that their football careers would be continuing on at the college level. Both players will be joining Bill Lynch and the Indiana Hoosiers this coming fall.

The rumblings that Dahlstrom was heading east to attend college had been reverberating through Putnam County for a while, but the 6-foot-3-inch Dahlstrom received a call recently that put all of those plans on hold. He had dreamed of going to Indiana for quite some time and that recent call made those dreams come true. Dahlstrom put pen to paper and signed his letter of intent to play at I.U. Wednesday.

"I was just ecstatic," a smiling Dahlstrom said of the call. "It was a little unexpected, but greatly appreciated. I was more than happy to commit to I.U. -- it's where I've wanted to go since my sophomore year. I was very excited."

Teammate Keyt echoed Dahlstrom's excitement about attending Indiana University. He acknowledged that both he and Dahlstrom have wanted to continue on together and that is still the plan.

"The opportunity to go Division I is just the chance of a lifetime," Keyt commented. "It was always a dream growing up and I've had people along the way tell me that I wasn't going to make it and it wasn't possible, but that's made me keep pushing myself. Also, to have my best friend to go down there and play with me, it's really going to help me. 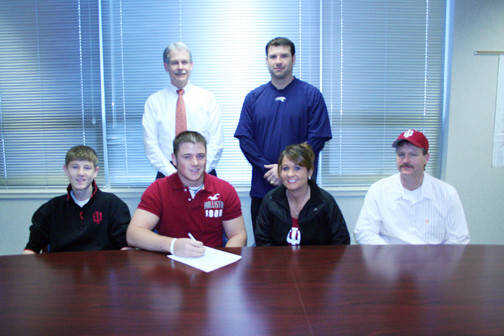 North Putnam senior Josh Keyt will be considered a preferred walk-on his freshman year and will become a scholarship athelte at the beginning of his sophomore season. Keyt was surrounded by his parents Janice and Monty and brother Chad. Also present were North Putnam principal Alan Zerkel and North Putnam head coach Greg Barrett.
Order this photo

"It just completes everything," he added.

All their hard work has paid dividends, but in the newest phase of their football careers, there will be an adjustment period. Players have said that the transition is like hitting a fast-forward button, as even the smallest elements of the game seem to take on a completely new pace. The two Cougar seniors anticipate this and look forward to the challenge.

"It definitely going to be a huge difference," Keyt noted. "It was a huge difference going from playing freshman games to playing varsity games my freshman year and it's just going to be something I have to get used to. I've been hitting the weights really hard and trying to get as ready as I can for it."

"It's going to be a lot different. A lot bigger and a lot faster and it will be something that will take some getting used to, but I look forward to it. It will be a challenge and a lot of fun trying to work at that level," Dahlstrom explained.

North Putnam head coach Greg Barrett was on hand for the signing and thinks the young men will take some of the magic they had on North Putnam's field to Bloomington and show Indiana fans something.

"It's pretty neat," he said. "I've been at 5A schools where we didn't have two Division I players, and then you come to a school like this where you have two guys going to the same school. It's impressive.

"It's a tribute to the hard work they've put into it and they are both extremely hard workers and good students. It's been a dream of theirs for a long time and the success they've brought to this program it's going to carry on to I.U. I hope the best for those guys and I'm excited for them," he added.

The duo knows that once senior year is over that many eyes will be following them to Bloomington, including young players throughout Putnam County. They accept the fact that they will have an elevated status among younger players and plan to do as they've done for so many years on the field -- lead by example.

"I think it will be great for younger kids to realize that anything is possible. Set your dreams high," Dahlstrom offered. "It's just one of those thing that even kids from small schools can do it too. We've got two guys coming out from one school this year, so it's just one of those things that if you really put your mind to it -- you can do it. It should be good teaching for the younger kids."

"Hopefully we can set good examples and be great role models for them up at I.U. and prove that just because you're from a small school doesn't mean that you can't go and play where you want to go," Keyt said. "It's just determination."

Barrett joined the Cougars for Keyt and Dahlstrom's senior year and the players have definitely made an impact on the coach. He spoke about the tradition that they could be starting and that while he was there for the next step in their careers, a lot of credit falls on their previous coach.

"Coach Pasch did a great job with these guys in the past. I'm happy to step into an opportunity like this; I'm also sad and crying at the same time that those two guys are leaving," Barrett said with a chuckle. "It's very neat for both of them and I'm happy for both of them."

Dahlstrom split time at running back and linebacker for the Cougars, but when he steps on the field for the Hoosiers it could be a transition. He confirmed that the team is looking at him for a couple positions on both sides of the ball, but will wait to make their final decision after the first rounds of practices.

Dahlstrom's new coach Bill Lynch spoke about the incoming freshman at a press conference Wednesday. He spoke about his versatility and acknowledged he had his eye on him for a while

"Griffen is the latest addition that we had," Lynch said at the press conference. "We've known him since he was a freshman and sophomore in high school. North Putnam is a small 2A school. He has done everything there; he played quarterback, full back, running back, linebacker, and defensive back.

"He absolutely does it all," he added.