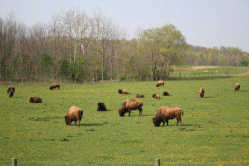 A herd of nearly 100 buffalo roam the fields of English's Buffalo Farm located near Bainbridge on U.S. 231.

In March 1995, John and Sheila English purchased their first three buffalo, Cherokee, Dakota and Cheyenne, and brought them home.

"They were so wild we couldn't get near them. We were beginning to think we made a big mistake," said English.

In August of 1995, they added a one-year-old bull named Chester. The next year they bought five more animals. Soon they outgrew their 26 acres.

In November 1996, they bought 102 acres in Bainbridge and moved the animals to the new farm.

Since that time, the herd has grown from nine buffalo in 1996 to over 80 today.

They also sell beads of all types, along with sinew and leather laces and jewelry.

Of course they also offer a wide selection of buffalo meat including roasts, steaks, ground meat, jerky, tenderloins and sausage.

Bison is very flavorful meat with a sweeter and richer flavor than beef. It is naturally flavorful and tender and can be prepared much the same as beef.

The meat has been considered a gourmet or specialty item at local supermarkets and meat markets. Nutritionally, the body gets more protein and nutrients with fewer calories and less fat.

Recently they added a Concession Wagon to serve buffalo burgers and hot dogs for events. They also offer tours of the handling and equipment areas and a look at the main herd of buffalo.

This summer, the farm was visited by a number of Future Farmers of America members during their national convention in Indianapolis. 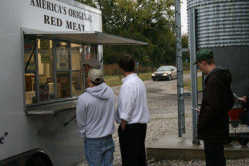 FFA students visited English's Buffalo Farm in the fall of 2008. They groups toured the farm and enjoyed a meal of buffalo burgers.

These students from all over the country learned facts about the buffalo. Some facts included finding the American Bison, commonly called a buffalo, is not an endangered species. There are an estimated 90,000 plus animals in privately owned herds in the U.S. and Canada.

Bison can outrun and out maneuver most horses. They can gallop over rough terrain at speeds of 30 to 35 miles an hour, for more than 10 miles at a time.

Bison are also live a long time and have been known to produce calves up to age 35. They reach maturity in nine to 10 years.

The Trading Post is open Friday, Saturday and Sunday from noon to 5 p.m. year round. They may be closed if they have a group event. They are also open most weekday afternoons. Call ahead to check at 765-522-7777.

Groups of 15 or more can request lunch from the Concession Wagon along with the tours. Cost for the tours are $3.50 each. For groups with lunch the cost is $10. For more information about English's Buffalo Farm visit them on the Web at www.englishsbuffalofarm.com