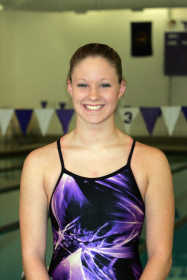 This was her fourth and final time at the state swim meet.

And it was the best performance of her career.

Kelsey Murtagh swam in the consolation round on the 100-yard backstroke event in the IHSAA Girls State Swim Meet in Indianapolis on Saturday and won the round with a time of 58.11, finishing ninth in the state.

In her first two years of high school, Murtagh never advanced out of the prelims and her junior year she finished 16th, so she was happy to cap her career off this way.

"I'm really excited right now," Murtagh said. "I lost my fourth place seed in the prelims and it knocked me down to 12th, but my goal was to come out and win this round and that's what I did.

"This was a good way to end my high school career," Murtagh said.

Murtagh's coach Luke Beasley was almost more excited about Murtagh's finish than she was.

"This is so cool," Beasley said. "It's a consolation round, but everyone saw her touch the wall first and she should be proud.

"Obviously, Kelsey came in with the goal of finishing in the top eight and she didn't get it. But, instead of throwing in the towel and not giving it her best today (Saturday), she made the best of the situation. This was a great way for her to end her career."