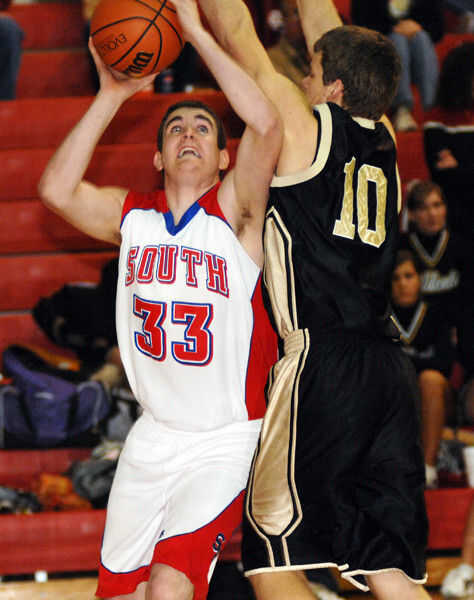 Noah Boswell goes up against a South Vermillion defender Tuesday. Boswell scored 15 to pace the Eagles.
Order this photo

Any coach will tell you free throws will make or break a game.

That couldn't have been any truer for South Putnam Tuesday night.

With just 18 seconds left on the clock, and the Wildcats leading 41-40, Dayne Nelson stepped up to the charity stripe for his chance to be the hero.

He lined up his first shot and swoosh, nothing but net -- tying the game at 41-all.

With the pressure on and the game riding on his shoulders, Nelson sunk his second free throw to give the Eagles a 42-41 lead and their sixth win of the season.

"Dayne Nelson had a big game for his last home game," SPHS coach Micah Elliott said. "He might not have had that many points in the book, but he hit those free throws when they counted."

The freebie saved the Eagles in the end, but it also almost cost them the game.

The Eagles were down 41-40 with 21 seconds on the clock, and Noah Boswell got fouled, sent to the line for two, and missed both of them. This gave the Wildcats a chance to win, but they fouled Nelson, sending him to the line for 1-and-1.

It wasn't until the last two minutes that the game got interesting.

South Putnam was down 37-31 with two minutes left when Boswell drove into the paint for the basket and the foul. He sank the freebie, and then the Eagles forced a five-second rule on the Wildcats inbound play. On the next turn, Nelson hit a basket to bring the Eagles within one at 37-36.

South Vermillion bumped their lead back up, But South Putnam did not quit and got within one again and nailed the free throws for the win.

"This is a very big win for us and we needed one like this," Elliot said. "These kids are resilient and kept fighting."

The Eagles struggled for most of the game. The Wildcats outscored them 11-8 in the first quarter and 9-8 in the second quarter, but things got better when South went away from the outside shot.

The Eagles went 2-for-7 from downtown in the second quarter and 1-for-2 in the entire second half. And when they weren't shooting three's they were passing the ball into the post where they had the advantage.

Boswell, the 6-foot, three-inch senior, led the team Eagles in points with 15, 14 of them came from inside the lane while the one was a free throw.

In junior varsity action the Eagles lost to the Wildcats in overtime 46-39.

"We started off putting the ball inside and then switched to the outside shot, but realized that wasn't our game and went back to the inside game in the second half," Elliot said.

The Eagles will be back in action on Friday when the travel to Owen Valley for their last regular season game before the tournament.

Tip off is at 6:30 for Junior Varsity with the Varsity following.