Historic preservation is alive and well in Putnam County 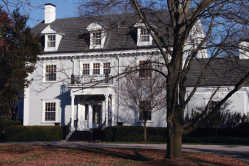 The Elms, home of the president of DePauw University, was listed on the National Register of Historic Places in 1984.

When Ephraim Dukes founded the town of Greencastle in 1821, he had no way of knowing what a great tradition of history he was instituting.

The original land for the town was donated in 1825 by Dukes' son-in-law, John Wesley Clark. Most of Greencastle still stands on that land today.

A few years later (in 1830) Indiana Asbury University (now DePauw University) was founded and the town grew. Many historic buildings can be found in and around the university.

One of the most significant is The Elms, the traditional home of DePauw's president. It is one of the most elaborate and best-preserved examples of Colonial Revival style in Greencastle. The Elms was nominated and placed on the National Register of Historic Places in 1984.

Not only has it been the residence of the university president but it has also housed several of the county's most prominent citizens.

Among the many Colonial Revival features of the home is a balconied entry portico, multiple light sash windows, columns, corner pilasters, a gambrel roof and a modillioned cornice.

According to DePauw University history, William VanArsdel moved to Greencastle In 1905. He was a lawyer, businessman, politician and Asbury College graduate. He hired Folz and Parker of Indianapolis to design the house, which was completed in 1907.

VanArsdel lived in the house until his death in 1922. Three years later his widow sold the property to DePauw University. From 1925 until 1981, The Elms served as the residence of every DePauw University president.

The home was remodeled in 1926 before President Lemuel H. Murlin occupied it. While President G. Bromley Oxnam lived in the house, the rear and side additions were added. A reception room and dining room were also built to provide space for entertaining and the accommodation of guests. A library was also added to the south side of the house.

"From 1933 until 1981, every important guest of the University was entertained at The Elms," says the University's online history.

In 1981, the house was sold to Robert West with the understanding that if it were ever offered for sale, DePauw would have the right of first refusal. In 1991, the property became available for sale and again became the property of the University in April 1992.

Numerous other homes and buildings with great historic significance are located in and around the DePauw campus as well as in other areas of the county.

In Greencastle, the Courthouse Square District bounded by College Avenue, Walnut Street, Market and Franklin Streets are included in the registry. These buildings date back to 1800's and as far forward as 1949. They include architecture that is late Victorian as well as late 19th and 20th Century Revival.

The Presbyterian Church will be 175 years old next summer. It is the oldest church in the state to have continuous services.

The Reelsville Bridge was added to the preservation list in 1999. It is located on C.R. 650W over Big Walnut Creek in Reelsville. The old concrete arch bridge, built in 1929, was replaced by a two-lane structure in a million dollar project. The old iron bridge was left standing to be restored as a pedestrian walkway.

Two farms are registered as well. They are the Appleyard (Alexander C. Stevenson farm or Ballard Farm) in Greencastle and the Melville McHaffie Farm (Schuyler Arnold Seed Farm) in Stilesville.

DePauw University, which is so closely tied to the growth and development of Greencastle and Putnam County, has several structures on the registry.These include East College, McKim Observatory, and the Delta Kappa Epsilon Fraternity House.

The F.P House known as The Towers sits on Seminary Street and is also registered.

Several homes are listed and include The Boulders on E. Washington St., Greencastle, the Alfred Hart House on W. Walnut, the O'Hair House near Brick Chapel and the Lycurgus Stoner House on Manhattan Rd.

Information about the National Register of Historic Places is available on their Web site at www.natonalregisterofistoricplaces.com or by calling 202-345-2213.