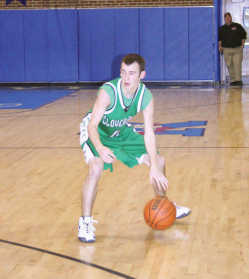 ROCKVILLE -- Coaches can never say some things enough: "Every possession counts," and "Take care of the ball."

But facing a quality, veteran ballclub, those lessons hit home even more.

"With a team like Rockville, you can't have a sloppy pass," said Clover coach Pat Rady. "They play well as a team. They really anticipate well on the defensive end."

As well as the Rox played, though, Rady said his team made its share of mistakes.

The game started out well enough for the Clovers. Both teams were mixing made shots with turnovers in the first quarter. Brandon Moon scored 10 of the team's 14 points in the quarter.

However, the Rox took care of their turnover problems as the quarter wore on. The Clovers did not. Rockville got hot late in the quarter and took a 15-14 lead right before the horn.

The second quarter was a matter of everything going wrong for one team and everything going right for the other. Cloverdale committed 12 turnovers in the frame while managing only seven shots.

By comparison, the Rox were on fire, going 12-for-15 in the quarter and turning the ball over just once.

The disparity translated to the scoreboard, as Rockville outscored Cloverdale 30-10 in the second for a 45-24 halftime advantage.

Besides the turnover issues, the Clovers had no answer all night for Rockville's 6-foot-8-inch R.J. Mahurin. The senior shot 15-for-26 from the floor on his way to 39 points on the night.

Aaron Bridge was also key for the Rox in the second, going 4-for-4 and scoring 11 of his 13 points on the night.

Taking the floor for the third, the Clovers looked like a different team.

"We had a very bad second quarter, but I thought we played well in the third. We didn't quit," Rady said.

The coach also had to be happy that his team fixed its turnover woes. After 20 at the half, they committed just six in the second half.

"We'll take six turnovers in a half against a team like this," Rady said.

While they never made a serious run at the Rox lead, the Clovers also let their opponents know they weren't backing down. The trimmed the 21-point deficit down to 13 at one point, and finished the quarter down 16 at 58-42.

But Mahurin and mates got hot again in the fourth, outscoring Cloverdale 16-10 in the final frame to win by 22.

Moon led the Clovers in scoring with 21 points. Eric Kukman and Jordan Hayden each had eight, while Kevin Dean added seven.

Falling to such a good team, Rady had to admit that he was proud of Rockville coach Dave Mahurin, who played for Rady at Terre Haute South. The elder coach admitted that he may be a bit prejudiced, but he thinks Mahurin has a quality club that should make a deep run in the tournament.

"I'm very proud of him with the way he's brought this team along," Rady said.

Turning his attention to his own club, Rady is still looking to for teaching opportunities as sectional approaches.

"We're hoping we can take this and learn from it. We have two games and then sectional," Rady said. "We have to still keep working."

The Clovers' work continues Monday as they host Owen Valley with a JV start time of 6 p.m.

On Friday, the Clover JV lost a heartbreaker to the Rox. After leading by six with under two minutes remaining in regulation, they lost to the Rox 41-33 in overtime.

Next game -- Cloverdale will host Owen Valley Monday at 6 p.m.