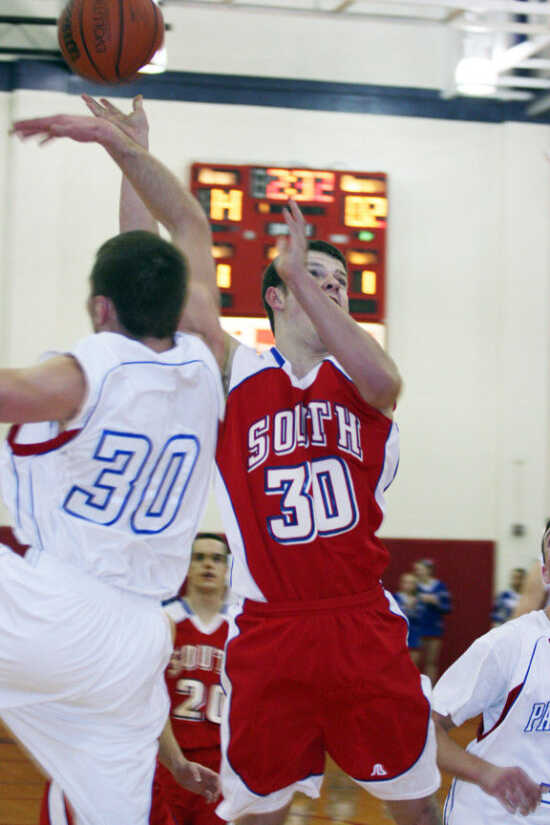 SPENCER -- Friday was a tough night all around for the South Putnam Eagles. They closed their regular season with a 31-point loss, 81-50 to Owen Valley, but it was more than the loss.

They have over a week before sectional action begins and the team has many questions that need to be answered before the tip. Head coach Micah Elliott spoke after the game about the team's need to elevate their level of play, especially in the effort department.

The Eagles walked on the Patriots' home court and seemed flat from the opening tip. They fell behind 14-2 midway through the quarter and that's when a change was made. Elliott decided to pull some of his starters and called on his bench to provide the lift the Eagles needed.

"I felt that our effort in the first quarter was not there," Elliott said. "I'm going to give credit to the guys that came off the bench. We're down 14-2, kids come off the bench and they are excited to play. We had a couple of JV kids come in and put in some really nice time."

After one, the Eagles found themselves down 20-8 and things didn't improve much before the half. As the clock ticked down and it seemed the Eagles would enter the break down 13, Cody Vest rose and buried a three-pointer at the buzzer, giving Owen Valley a 38-22 edge.

In the second half, the Patriots continued to have an answer for everything the Eagles dished out. When South would score a bucket, Owen Valley would hit a three. If the Eagles hit a free throw, the Patriots would convert a three-point play. It was just that kind of a night.

Owen Valley kept a double-digit cushion between themselves and the Eagles for the remainder of the game. When it was all said and done, South Putnam exited the court suffering an 81-50 loss.

Seniors Noah Boswell and Conor Frame had solid second half performances for the Eagles. Boswell equaled his first half tally of 11 to end the game with a team-high 22 points, while Frame dumped in eight of his 10 points in the half.

After the contest, Elliott wasn't happy with the loss, but he was even more disturbed by the lack of effort displayed by his squad. He acknowledged that his bench came in and played strong, but it will take an effort from the entire team to get the desired results that all are looking for.

"I'm not asking the kids to make every shot, I'm not asking them to dunk it every time; all I'm asking of them is to play hard and have a good attitude," Elliott explained. "I feel that after the first four minutes of the first quarter and the second quarter, we're playing well. Teams tend to play well against us due to our defensive effort. I just didn't think it was there tonight."

The Eagles have a week to prepare for county rival Cloverdale who they will face in their opening game of the South Putnam Sectional on Tuesday. Elliott hopes the team can us the team to address some of the issues he saw on Friday and be a force when the sectional begins.

"Entering the sectional week, we know who we're playing and we have to get better," he said. "We have five days of practice next week, which is a good thing to turn some things around. There were some positives in it and we're going to take those positives and build on them next week and get ready for Cloverdale.

"When we play Cloverdale, we're going to have the kids on the floor that are going to compete," Elliott assured.