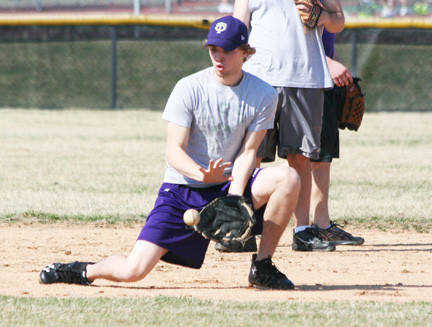 GHS senior Drew Stewart digs low for a ground ball during a recent Greencastle practice. A seven senior core will be key for Greencastle's success.
Order this photo

With seven seniors, nine returning lettermen and an intact pitching crew, GHS head coach Troy Remsburg has reason to smile. The Tiger Cubs went 9-15 last season, but a new sun has risen on the GHS program.

Remsburg has moved up from assistant coach and will now look to put his stamp on the Tiger Cubs. Coming off a losing season and having a first year head coach, GHS will look to reverse its fortune.

"I'm actually expecting a lot," Remsburg said. "We have nine returning lettermen, seven of them are seniors. We have all of our pitchers returning, so that will be a strong suit for us this year."

Senior Kyle Nobles will be the Tiger Cubs ace on the mound this season and a powerhouse at the plate. Nobles broke the school record at the plate, batting a .458 last year.

Remsburg also noted that he has a nice group of younger players who are ready to contribute. The team lost three seniors and will have to find ways to fill their holes.

"We lost three seniors last year," Remsburg commented. "We lost Kendall Faust, Blake Robinson and Jeremy Hayden. Kyle Johnson will be taking over catching this year. He caught some varsity last year when Kendall was pitching and he did a really good job until he broke his hand halfway through the season.

"We're going to have guys playing multiple positions this year depending on pitchers," he added. "All of our pitchers play key positions out in the field, so there will be some platooning. It's (lineup) not etched in stone, but we should be pretty deep."

Hitting is always a concern for any team and Greencastle is no different. With most all of their core returning, the Tiger Cubs feel that their experience will help with that.

"Hitting should be better this year, with everybody returning. Nobles, Graham Shuee, Logan Grzesiek, Justin Bartrum and Trey Ford have all had three year plus on varsity, and this will be Nobles fourth year varsity. We have some key players senior wise that should lead us," Remsburg said.

Rounding out Greencastle's senior group will be Mike Mahoney and Drew Stewart.

Greencastle will also look to utilize its speed on the bases in an attempt to keep opponents on their heels.

"We're going to do a lot more running this year," Remsburg said. "We have a fast team and I'm going to take advantage of that, defensive wise and offensive wise. I don't care too much about the long ball offensive wise, but we've got players that can hit home runs. They just seem to never come when you want them."

When speaking about the talent the Putnam County teamsRems have, Remsburg was quick to point out that he believes it will be a toss up for the county title. That, among other things, is one of the coach's goals he has for the team.

Remsburg acknowledge his familiarity with the team due to the fact that he has coaches most of the team from their childhood.

The one aspect that the GHS coach wants the players to keep in mind is their attitudes and mindset. He said the kids are in a verypositive frame of mind and he hopes they continue as the season progresses.

"Every kid makes a mistake on the field. It doesn't do any good to get mad or dwell on it. You have to forget about it and move on," Remsburg said.

Last season's struggles saw the Tiger Cubs drop contests by the slightest of margins, and Remsburg knows where the team has been and where they are headed. They gave an eventual state champion a run for its money and played strong at the sectional, which give Remsburg a reason to be hopeful.

"We didn't have a winning season last year and I can't remember how many games that we lost by two runs," Remsburg acknowledged. "Crawfordsville beat us 2-0 and they were state champs last year. We went extra inning with Edgewood at sectional and just couldn't get the right hit and the right time and we should have beat them.

"I think the kids have finally realized what they can do and I hope they do it. They're hungry, they're very hungry. They're tired of getting beat by North Putnam in county and I am too. That's just the competitiveness in these kids and in me," he concluded.

Greencastle will open its season at home against North Putnam Monday April 6 at 5p.m.