Some Putnam County elementary school students are learning important lessons about drugs, alcohol and nicotine at an early age. On Monday evening, several of those children were able to impart those lessons on others.

At the Putnam County P.I.E. Coalition's annual meeting and recognition night, six fourth- and fifth-graders from Putnam County schools shared their Red Ribbon Week drug free essays. The essays were written last fall during Red Ribbon Week, and the P.I.E. board chose the top three from each grade. 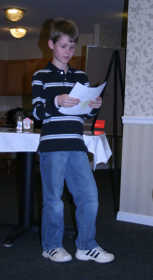 While all essays focused on reasons to avoid substance abuse, the six children took a number of approaches and offered some very compelling arguments on why drugs, alcohol and nicotine should be avoided.

"I wish someone had told my grandparents no to smoke because they might still be alive today," Musgrave said.

Second place in the fourth grade was Scott Myers of Cloverdale Elementary School.

Myers offered his audience an interesting question: "If someone is doing drugs, their teeth could fall out of their mouth. Do you think that would be attractive?"

The winner of the fourth grade competition was Andrew Johnson, also of CES. Johnson reminded everyone that drugs have an effect on users and those close to them.

"So you see, there are no good reasons to do drugs," Johnson said. "They can hurt you and the people around you."

In the fifth grade, Bradley Schrader of Central placed third in his class. His reason to stay drug-free has everything to do with his future.

"I don't do drugs because I care about my life and future career," Schrader said.

Second-place finisher Emily Baugh of Central chose to challenge her readers and listeners.

"It's not my decision or anyone else's. It's yours," Baugh said.

Fifth-grade winner Jonah Stevens of Central let his audience know, in no uncertain terms, where he stands on the issue of drug abuse.

"I don't care how good or comfortable they make you feel, I'm not going to do drugs," Stevens said.

For their accomplishments, the children all received certificates as well as $25 Wal-Mart gift cards for the second- and third-place finishers and $50 cards for first place.

P.I.E. Coalition President and Greencastle Police Chief Tom Sutherlin congratulated the youngsters on their accomplishments and reminded everyone that Putnam County is not immune to drug problems. He said these kids are encouraging signs for the future.

"It excites me to see kids this young and their teachers take stands against drugs and alcohol," Sutherlin said. 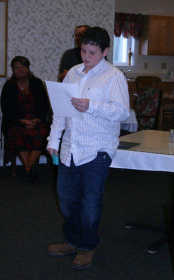 Although he was not present Monday, P.I.E. also honored Prosecutor Tim Bookwalter for the contributions he makes to the organization.

P.I.E., which stands for Prevention, Intervention and Education, is a cooperative county-wide effort to reduce the abuse and illegal use of alcohol, tobacco and other drugs. It also strives to implement a comprehensive plan of prevention, intervention, education, treatment and justice for all persons of the county, and to coordinate efforts to combat chemical dependencies that exist in the county and to enhance their effectiveness.