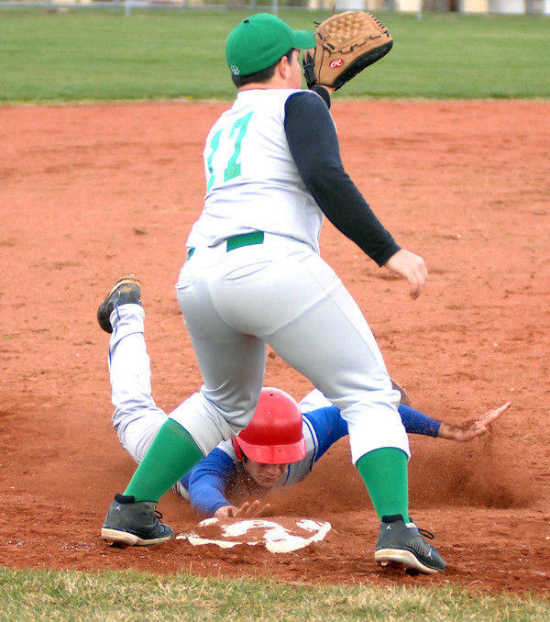 CLOVERDALE -- Noah Boswell tossed a four-hitter, while Cameron Chestnut collected stolen bases left and right and Josh Flory got his first save of the season against his old team. The Eagles opened the season with a 6-2 victory against Cloverdale.

In the midst of tossing the four-hitter, Boswell struck out 12 batters while allowing two earned runs.

"Boswell gave us six great innings -- about one more than I wanted him to because of his pitch count and Josh Flory came in and closed it out the way we wanted him too," SPHS Coach Troy Burgess said.

Chestnut started the Eagles off right away when he got on base with a single. He then stole second and third base, positioning himself for the score. He then scored on Boswell's sacrifice fly to center field.

Boswell tacked on the Eagles' second run of the night when he scored on an error after sending one to warning track in left field for a standup double.

Chestnut added two more stolen bases to his collection in the top of the fifth frame after singling past the infield. He then scored on a passed ball, followed by Boswell scoring on a Clover error.

"Our kids did good tonight," Burgess said. "We were aggressive with our base running, but we were smart about it."

Aggressive might be an understatement, as South Putnam finished with seven stolen bases for the evening.

Cloverdale finally got on the board when Jon Alexander put one into the gap between right and centerfield, scoring Frank Skiles and Ethan Atwood, cutting the Eagles' lead to 4-2, but that's all they could do.

The Eagles tacked on their last two runs in the top of the sixth when Grant Zimmerman blasted a two-run triple for the final score.

Despite their scoring efforts, the Eagles only managed five hits off of the Clovers pitching squad.

"We didn't hit the ball as well as I would have liked, but we put it into play when we needed to," Burgess said.

The Clovers struggled with their hitting also, but didn't have the same results.

"Boswell was throwing great stuff and he did a great job for his team," CHS Coach Bryan Archer said. "Our hitting needs to improve. We need to start hitting the ball before the third inning."

Cloverdale had four hits, just one less than South Putnam, including a triple by Skiles in the third when he sent one to fence and double by Matt Hall.

"The kids played hard and never gave up," Archer added. "And for that I am proud of them. We just need to be more aggressive at the plate."

Chad Cummings started on the mound for the Clovers, striking out six while allowing three hits and four runs before Jeff Dale came in for the relief.

"I think Chad did a good job for us in his first outing of the year," Archer said. "He did everything we wanted him too. He threw strikes, gave us ground balls and pop ups to field."

Both teams will square off again today at 5 p.m. at South Putnam for the conclusion of this team game series.