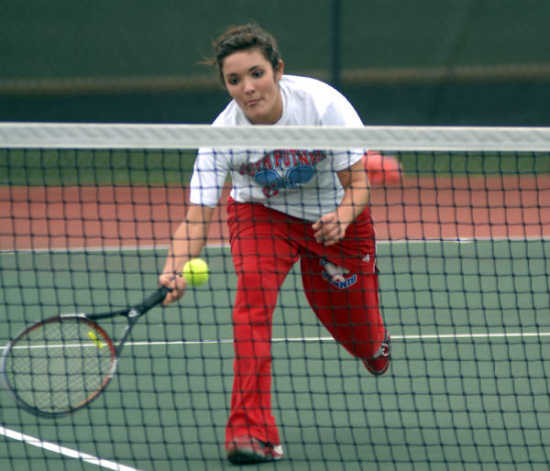 Johnnie Briones said that he was anxious to see where his tennis team measured up with Greencastle and to see how far they have come since the beginning of the practice.

The results were better than expected.

South Putnam cruised by Greencastle 4-1 Tuesday night, giving Briones something to smile about.

"Any time you can come in and beat Greencastle in tennis, it's a big thing because they have been so successful in the past years," Briones said. "So it's a big win for us and if we can continue our winning ways that would be great.

"We play Turkey Run tomorrow, so I'm anxious to see how well these girls do playing back-to-back," he added.

Surprisingly, the first team to score a point for the Lady Eagles was the newly formed No. 1 doubles team of Megan Klotz and Tabitha Arnold. This was Klotz's first No.1 doubles match and Arnold's first doubles match all together. But you couldn't tell that by watching them play.

"I knew with Tabitha having Megan as a partner, she was going to be OK," Briones said. "Megan is good about not letting something bad that happens keep her down. She just moves past it and keeps playing.

"I knew once the match got going, Tabitha was going to loosen up, so I wasn't too worried about them," Briones said.

Arnold said that she wasn't too nervous playing in her first doubles match; there were just a couple things she had to keep in mind.

"The biggest thing was ball placement for me," Arnold said. "Where you are supposed to hit the ball in a singles, you can't do in doubles because there is girl standing there.

"Overall the transition to doubles has been pretty smooth. I've been playing tennis for a long time so it's just a matter of me putting the ball in the right place at the right time," Arnold added.

The one match that caused Briones some concern was the No.2 doubles team of Kaitlynn Nissen and Kyley Brown. After winning 6-4 in the first match of the set, and taking a large point lead in the second, the duo allowed Greencastle to come back and tie the score at 5-all, nearly forcing a tiebreaker.

"I was kind of worried there for a while in that match when Greencastle battled back and tied the match," Briones said. "But they held on for the win."

Brown and Nissen won the match 7-5.

The match that South Putnam secured the win with was the No.2 singles match where Kendra Latham defeated Katie Farris 6-2, 6-3.

Surprisingly, the one match that Greencastle did win was the No.1 singles between Katie Collins and Abbie Trauner. Collins, who played on the No.3 singles JV team last year and had very little varsity experience, defeated Trauner 6-4, 6-3, something Collins was happy about.

"It feels pretty good to win my first match as the No.1 singles player," Collins said. "I worked really hard in the off-season with coach to get where I am right now."

Another match that almost went the Lady Tiger Cubs' way was the No. 3 singles match between Ashley Ross of South Putnam and Emalie McClain. Ross took an early lead in the first match, but McClain battled back, pushing the final score to 7-5. Then Ross quickly ended the set with a 6-1 victory in the second match.

Despite losing the match, GHS Coach Sally Martin was happy with the way her team performed.

"We graduated everybody except one person from last year's varsity squad and she wasn't here tonight, so I think we did all right," Martin said. "We have a lot of young players on the team this year, but I could tell that many of them have practiced during the off-season and have improved their game.

"Like our No.2 doubles team. Last year that team was made up of seniors, where this year it's comprised of a junior and sophomore who haven't played with each other before. So for them to battle back like they did in the second match of their set, even though they lost, was impressive," Martin said. "I look for us to get better as the season moves on."

South Putnam is back in action today when they host Turkey Run at 4:30 p.m., while Greencastle will play again Thursday when it hosts Rockville at 4:30 p.m.