Joe Smith was a heavy child.

As he grew into adulthood, he continued to be overweight, although he was always able to function. He had a full-time job, worked with the horses and did other chores on his Reelsville farm.

Then in 2003 his mother, his only living parent, died. Joe spiraled into a deep depression -- and turned to food for comfort.

"I just drowned my sorrows in a big plate of whatever," he said. "I had to face that I'd lost both parents, and I didn't know how empty I'd feel." 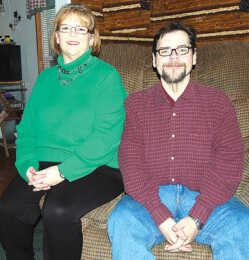 Joe and Peggy are pictured at their home recently.

Before he really realized what was happening, Joe weighed 565 pounds. His blood pressure was out of control and he was having trouble with his legs.

His size 64 jeans were getting snug.

"His doctor told him he might as well stand out on I-65 and dodge traffic, because he was going to die," Joe's wife Peggy said.

Peggy said she saw her husband's weight ballooning, but couldn't bring herself to talk to him about it.

In 2007, Joe began talking to his doctors about the possibility of gastric bypass surgery to get his weight under control. He was so heavy that he found it nearly impossible to exercise, so dieting didn't work.

And he had new motivation for getting healthy -- he and Peggy were in the process of adopting their sons, 5-year-old Charlie and 4-year-old Zane, who came to them as foster children in July of 2006.

A gastric bypass first divides the stomach into a small upper pouch and a much larger, lower remnant pouch, then rearranges the small intestine to allow both pouches to stay connected to it.

GBP leads to a marked reduction in the functional volume of the stomach, accompanied by an altered physiological and psychological response to food. 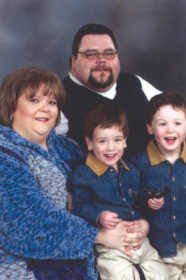 This photo of Joe and Peggy and their sons was taken shortly before Joe's surgery.

Looking back on it, Joe realizes his life was definitely in jeopardy because of his weight.

"I honestly feel I would have been dead by now (without the surgery)," he said.

After her husband had his surgery, Peggy started thinking about having it herself. She weighed 303 pounds, and although she had no other health issues, she had tried diet after diet and nothing worked for her.

"I had actually wanted (weight loss surgery) first," she said. "But my doctor refused to refer me. He told me I could lose 150 pounds on my own."

Peggy found out that it wasn't necessary for her to have a doctor's referral to have the surgery at St. Vincent's, so she went to the consultations and scheduled it. She had her surgery on Nov. 18, 2008.

Peggy, 38, saw her surgery as something of a preemptive strike. People on her father's side of her family have a history of dying young. Her father had open-heart surgery when he was 39 years old, and died in 1993.

Peggy bristles when people refer to weight loss surgery as "the easy way out."

"I just want to tell those people that they need to live my life ... to eat what I eat and do what I do," she said. "When you have this done, the surgeon gives you the tool, but you have to do all the work."

After gastric bypass, the stomach is literally the size of a ping-pong ball. For the first four weeks, patients can have no sugar at all and can only eat soft foods. No meat or vegetables can be consumed.

As the body adjusts, foods can be added slowly, but they can only be eaten in very small amounts. Because the stomach is so small, the patient must take a variety of vitamins, supplements and other medications to prevent malnutrition.

Joe said his whole taste for food changed after his surgery.

"Before the surgery, there was nothing I liked better than a big old steak," he said. "Now it just doesn't set right. I'm always thinking things smell really good, but I just don't have a taste for them anymore. I'm happiest now with a bowl of cereal."

"You have to give up everything you love," he said. "As depressed as I was at the time, I felt like I was giving up that one thing in my life that was giving me any joy."

To date, Peggy has dropped 84 pounds, and has 80 left to lose to reach her goal weight. While Joe's weight came off quicker in pounds, Peggy loses inches faster.

"I feel so much better," Peggy said. I have more energy, and I enjoy going shopping for clothes a lot more than I used to."

Not being able to eat like she used to has proved to be a challenged for Peggy.

"Where I work, there are constant pitch-ins," she said. "There are monthly meeting with food; people bring in food for Christmas and birthdays."

Peggy goes to the gym to workout, while Joe gets his exercise at his very physical job at Bemis in Terre Haute and by doing farm chores. The couple, who have been married since Nov. 11, 2000, make it a point to walk every day.

Peggy and Joe both plan to have reconstructive surgery to tuck the extra skin left by their weight losses, at least on visible areas, once their weights level off.

Peggy goes back and forth on whether or not she would have to surgery again, but for Joe there is no hesitation.

"I would definitely do it all over again," he said. "My boys are my reinforcement. I want to be around for them. When I told my doctor I wanted to be around to see them graduate from high school and get married and he told me I'd be lucky to see their next birthdays, I knew I had to do something."

The weight loss itself is still surreal to Joe. He often asks Peggy to compare him to other people, inquiring as to whether he is larger or smaller than they are.