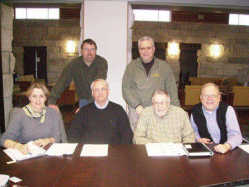 A little less than a year ago, Putnam County was declared a disaster site after rain poured down and rivers and creeks flooded the area. Two years ago around the same time, tornadoes blew through the county causing damage to trees and structures. In 2002, a blazing fire destroyed Rector Hall on the DePauw campus.

What happens when a disaster strikes? Who responds? And, how quickly does that response come?

"When the county was hit with floods last June, it took FEMA three days to get here," said Putnam County Emergency Management Agency Director Kim Hyten. "And, that is typical. They tell you to be self sufficient for at least 72 hours."

Putnam County doesn't have enough manpower to get through a severe disaster without asking for help from the community. A small group of citizens is attempting to put together a Community Organizations Active in Disaster (COAD) in Putnam County.

They invited 25 people they felt could bring something to the group. A handful attended the meeting at the Prindle Institute on the DePauw campus.

"This highlights our problem. Unless we're coming off an emergency like a June flood, we don't get a good response," said one of the organizers Doug Cox, DePauw's Emergency Management Director.

On the other hand, Cox also noted, "Not very many communities can say they have the kind of cooperation between city and county fire departments, police and emergency responders that Putnam County has.

"This lulls us into a sense of being able to call Bill (Newgent) or Tom (Sutherlin) or Kim (Hyten) to take care of the problem," he continued.

But the actual number of emergency responders won't be enough to help the county be self-sustaining as the wait for help lengthens.

"My eyes were opened at tabletop earthquake training. Experts say to expect that one-third of your people are not coming in," explained Tom Sutherlin, Chief of Greencastle Police.

"I only have 16 officers and if a third of them can't get here to help, I only have 10," said Sutherlin.

"None of us have enough people to get us through a severe disaster," he added.

This is one of the reasons behind the creation of a COAD in Putnam County. Creating a COAD helps the county prepare for the next hit.

The principles of a COAD include: providing a forum for information sharing, communication, cooperation and collaboration between agencies involved in emergency management.

The goals of a COAD include alleviating the suffering, coordinating human services and developing plans, training and exercises for disaster operations.

"If your ox hasn't been gored, you don't have a problem yet," said Dick Andis. "We've been pretty lucky here so far, but we may be due. We need to be prepared."

"Many models exist, whether they are COADs or Citizen Corps. The end result is that no matter what model or combination chosen, we live in a time where community volunteers in times of disaster are essential. Unifying the volunteer organizations and understanding the structure of command of our emergency services are key goals," explained Cox.

"Our hope is to gather this group and consider the needs of our communities, resources, awareness, education and formal development of a COAD model," he concluded.

The group asked Newgent, Sutherlin and Hyten to come up with a list of what their needs might be in an emergency. Once that is completed, the group will come together again and look at the next step.

Links to information about COADs and other similar groups can be found at www.citizencorps.gov, and www.cityofvancouver.us/preparedness.asp

For information about joining the COAD movement in Putnam County, contact Doug Cox at 658-5018. Watch the Banner Graphic for updates on the development of the COAD.