For six decades, DePauw University's WGRE radio has been broadcasting news, sports and music over the airwaves. On April 29 they will celebrate their 60th birthday with an all-campus concert, popcorn, photo booth and community birthday cake on the east lawn from noon to 4 p.m.

A 15-member student board of directors and over 200 student participants run the station that operates 24 hours a day seven days a week. 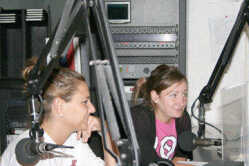 Deejays Brooke Hollingsworth and Ashley Fehr man the radio booth every Tuesday from 11 a.m. to noon for their radio show at DePauw's WGRE station. The girls are DePauw University students and part of the 200 students who help to make the school's radio station a success.
Order this photo

"WGRE has a dedicated team of sports and public affairs reporters that cover local, regional and national events," said DePauw faculty advisor Dr. Jeff McCall. "And they have been the host of candidate forums in western Indiana for over 20 years."

The station covers Tiger athletics, trains deejays at all skill levels, partners with the community in various giveback opportunities and has introduced students to breakout artists including Lupe Fiasco, the Raconteurs, Modest Mouse, John Mellencamp and Wilco.

Weekly specialty shows include "Girls Who Rock," a show discussing relevant feminist issues while exposing the audience to a wide variety of female artists.

"WordPlay" is a show exploring the nuances, oddities and playfulness of daily English conversation.

The "Best Week Ever" features the latest and greatest music and "Dancing About Architecture," is a show devoted to jazz, blues, rock and fusion music.

On the day the Banner Graphic visited WGRE, the station had just been notified it won several awards for documentaries and sports. Over the past 15 years, WGRE has received more than 100 awards for news, sports, public service and other activities from organizations such as the Indiana Associated Press Broadcasters, Indiana Press Club and Sigma Delta Chi.

The station has been a finalist three times for the National Association of Broadcasters' highest honor -- the Crystal Award, which recognizes service to community. WGRE is the only non-commercial station to have been so recognized.

Additionally, the Princeton Review has recognized the station as one of the top six college radio stations in the nation each of the last six years and a number one ranking in 2000.

"The skills students learn at WGRE carry far beyond weekly radio shows or news reports. The station is proud that many of its past deejays, station managers and sports reporters have gone on to achieve great things in the world of broadcasting," said Elliott.

In 1941, DePauw University got its first taste of radio when students began broadcasting on WIRE, an Indianapolis radio station that provided airtime to the school.

Under the direction of Paul Fay, a psychology professor at DePauw, most of the broadcast was live from Harrison Hall and included classical music performed by the school of music as well as Saturday afternoon dramas.

Fay eventually resigned and Herold T. Ross was appointed his successor. Ross heard that the Federal Communications Commis-sion (FCC) granted Syracuse a license for a five-watt station and applied for one for DePauw. 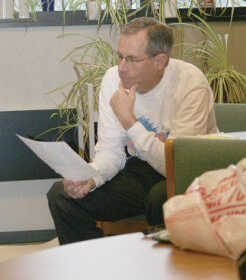 WGRE faculty advisor Dr. Jeff McCall looks over an old photo from the early 1970s during the radio station's weekly board of directors meeting. McCall just happened to be in the picture, much to the delight of his young board members.
Order this photo

The FCC granted him and the university a license for a 10-watt FM educational station, the first in the nation. On April 28, 1949 WGRE began broadcasting across the airwaves. They were also the first radio station in Putnam County.

Ross turned over the faculty advisor position to Professor Betty Turnell, who served from 1949 to 1971.

"Ross and Turnell were real visionaries for their day," said McCall. "They recognized the study of media and determined that broadcasting was a good outlet for students, giving them a voice."

Turnell was instrumental in developing the programming of the station and in getting the station moved into the new Union Building with a state-of-the-art studio in 1952.

In 1962, the station moved from 10 to 250 watts and increased their broadcast radius from six to 25 miles. Five years later, WGRE was named Station of the Month by the magazine College Radio.

In 1986, the station began broadcasting 24 hours a day during the school year. They have continued their round-the-clock programming since that date.

When the Pulliam Center for Contemporary Media opened in 1991, WGRE relocated to a state-of-the art facility there and broadcast now at 800-watts.

Their horizons expanded even more in 2000 when they began broadcasting over the World Wide Web.

"We have MP3, video and photos on the Web site," said Operations Coordinator Chris Newton. "We know that the majority of students listen to us on their computer and not on the radio."

Newton and McCall both recognize the convergence of the media and the cross pollination between print, radio, television, computer and other electronic means.

"We spend a lot of time looking for ways to drive traffic to our Web site. We know the future is digital with high definition radio and television evolving over the last 10 years. Who knows what the future will bring?" added Newton.

Expanding to the Web site turned the station into an international news source. The station has a large number of alumni, students, parents, friends and family members who listen from all over the world.

WGRE is 91.5 FM on the radio dial. It can also be accessed at www.wgre.org

Call them at 658-4641 or send an Instant Message to WGREREQUEST on AOL Instant Messenger with song requests.