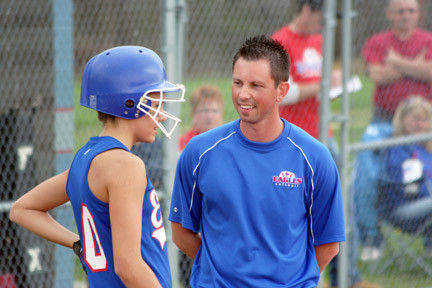 South Putnam head coach Chris Jones shares a smile with freshman Emily Dabkowski. Dabkowski was 3-for-4 on the night, with a triple, a double and an RBI.

After suffering a first-inning scare, the South Putnam softball team moved its record to 7-0 on the season with a win over Monrovia Thursday. The Eagles upended the Bulldogs 9-2.

Monrovia came to play and forced the Eagles into a jam early in the first inning. With the bases loaded, one out and a run already scored, South Putnam displayed why it sits undefeated on the season.

Two quick outs later, the Eagles found their way to the plate and dug a hole the Bulldogs couldn't claw their way out of.

"I was worried. We got out of a big jam; we only allowed one run when they had the bases loaded," Eagles head coach Chris Jones said. "We got out of it, which I'm proud of Sarah (Burnham) and our defense to get out of that with only one run."

When the Eagles came to the plate, they had 14 appearances, with one triple and three doubles. When the dust settled on South Putnam's onslaught, they had put up eight runs.

"We didn't come out very focused and I told the girls, 'you better focus or this thing is going to be really, really competitive,'" Jones said. "Then they came out and put an eight-spot up. I really think we could have gotten a few more.

"It was a great first inning batting for us. Then we relaxed and kind of settled and they fought tooth and nail and it was 1-1 for the remainder of the game," he added.

South Putnam added their other run in the sixth inning.

Monrovia threatened the Eagles at times during the contest, but for everything they had, South Putnam had an answer. The Bulldogs found their way onto the bases, but left six runners stranded.

Dabkowski was 3-for-4 for the Eagles, with a triple, a double and an RBI. Brooke Boetjer, Sibbitt and Welch had two RBIs each.

The efforts of the Eagles' pitcher and defense weren't lost on their head coach. Jones was proud of how they responded to Monrovia and got out of jams when they needed to.

"We got out of some situations that could be tough and could allow them to get some momentum -- and we didn't allow them to get that momentum," Jones noted. "It was nice to see Sarah to get he second win of the year. She pitched real well. It's a nice luxury for us to have two pitchers to be able to throw in conference games like this."

With a relatively young team, under a new head coach and a new system, the Eagles haven't skipped a beat. Their one-two pitching punch is a pair of freshman, with underclassmen peppering the field. With a young team and first-year head coach, Jones commented that there's still a learning curve. Thus far, the Eagles are passing with flying colors.

The Eagles have North Vermillion Saturday, but the buzz throughout the county is about their Monday match-up with North Putnam. Jones would love to make the trek North with an undefeated record, but he promised that his team is not looking past the game in front of them.

"I'm proud of the girls," he said. "I told them that we're undefeated so far in the conference and throughout the season, so just keep working and get better."