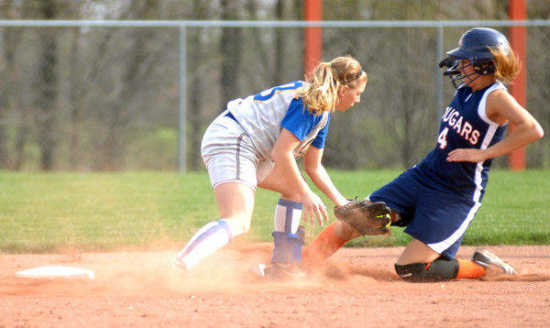 ROACHDALE -- With Taylor Judy fanning batters left and right from the circle and her teammates getting timely hits, North Putnam cruised to a 4-2 win over Crawfordsville.

Judy struck out 11 Athenians, while allowing only three hits and one earned run in Friday's game.

Judy was the defensive leader for the Cougars, but Logan Doyle and Dakota Malayer led the offense.

After Crawfordsville stole home for the first run of the game in the top half of the first inning, Malayer tied the game up Cougars with her RBI single.

In the bottom of the fourth, she put her team ahead when she jacked a full count pitch over the left field fence.

In the top of the fourth, the Athenians tied the game when Sydney Brock singled for an RBI and loaded the bases for her team. With the bases loaded and no outs, Judy found herself in a situation that no pitcher wants to be in -- but that didn't bother her.

Judy did what all good pitchers are supposed to do, make the batter pop it up.

Crawfordsville's Ariel Hinton nailed Judy's lowball and it looked like that the Athenians were going to score another run, but Judy reached down and snagged the ball before it could hit the ground for the out. The next batter drove her pitch to Carlye McGaughey for the second out and before the runner at third could get back to the bag, McGaughey threw it to Mackensy Asbell for the double play.

"That double play for us in the fifth was big," Brothers said.

With the score tied 2-all, North Putnam needed something to spark its offense and that was Doyle.

Doyle walked up to the plate in the bottom of the fifth and sent her first pitch over the left field fence for her second home run of the season.

"Logan did a good job in the fifth and she is beginning to hit the ball like she did in the beginning of the season and that's a good thing," Brother said.

Elsiana Crosby gave the Cougars a cushion in the next inning when she singled for an RBI and the final run of the game.

All in all, the Cougars collected eight hits for the game and that is something that Brothers was happy about.

'We swung the bats well today," Brothers said. "Dakota hit the ball well for us, going 3-for-3 on the day and Elsiana Crosby's did a great job for us as well. Her hit drove in that last run that gave a little cushion there at the end."

Elsiana Crosby also went 3-for-3 for the day.

North Putnam is now 9-1 on the season and will be back in action on Monday when they host South Putnam at 4:30 p.m.