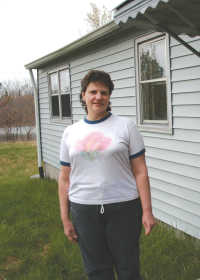 Seventy-nine-year-old Florence Ward has lived in her house on Beveridge Street in Greencastle since the last day of 1976.

Her husband Charles died of lung cancer 10 years ago, and Ward herself was diagnosed with breast cancer last July. She had a double mastectomy and underwent a full course of chemotherapy. She has had a hard time bouncing back from the chemotherapy.

"It just drains you," she said. "You don't seem to get over it too quick." 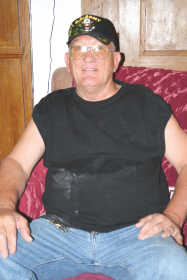 Ward, who was always a housewife, was born in Greencastle, and she has called it home all of her life.

Her house on Beveridge Street is beginning to show signs of age, and Rebuilding Together Owen-Putnam has stepped in to help Ward be able to stay in the home she and her late husband bought together nearly 33 years ago.

RTOP is a local chapter of the national organization Rebuilding Together. The chapter serves Owen and Putnam counties.

Rebuilding Together focuses on helping the elderly, the disabled, and families with children who are restricted by low-income and need help to make necessary repairs and maintenance to their own homes.

RTOP provides these services at no-cost to the homeowners and relies on the generosity of businesses, churches, and individuals to make these projects possible.

The local chapter is overseen by Tom Woodley. Today and next Saturday, May 2, groups of local volunteers will do repairs to several homes in the area.

"Everything's got so run down, and I'm no carpenter," Ward said. "I just want to stay for as long as I can in my own home."

The repairs to be conducted on Ward's house include patching leaky ceilings, replacing railings on the porches and the installation of new kitchen cabinets.

Ward's granddaughter applied to Rebuilding Together for Ward.

"I had no idea she was going to do it," Ward said. "I just think it's wonderful that there are people who would do this. I would never have dreamed that one day I would be involved in something like this in this way."

Being a Rebuilding Together recipient has made Ward think a lot about her late husband, who worked as a maintenance man at DePauw University.

"The thing is, we worked hard for everything we had, and we never asked for anything," she said. "I don't know how my husband would feel about it. He had a lot of pride, and there were times when the kids were little that we had it rough ... but we stuck together and we made it."

She paused for a minute, looking thoughtfully at a framed photograph of her and her husband.

"I think, though, that he'd just be very grateful," she said with a small smile.

"This is our third year to be involved," said Greencastle Christian pastor Steve Newland said. "I think people want to volunteer because it's a concrete, physical need. They help, and they see it happen. A lot of what we focus on is the spiritual ... it can take months, even years, to see anything."

The volunteers from Greencastle Christian range in age from 14 to their 70s. Newland said it has gotten easier each year to get volunteers, and called Rebuilding Together "a really effective ministry tool."

"We just get a huge sense of accomplishment," Newland said. "There is such a good feeling in being able to help someone ... in being part of the solution to a problem. We want people to be able to feel God's love. It's a way to show them there are people who care about them."

One of the homes Greencastle Christian is financing and working on belongs to Cheri Carman, a single mother of two who lives in Quincy.

Ji, who she home schools, has had health problems and suffers from a heart condition and periodic seizures.

Rebuilding Together volunteers will be replacing large areas of flooring in Carman's home (there are several areas in the kitchen and dining room where she and the children have actually gone through the floor). The house also has major plumbing problems, so the volunteers will be redoing Carman's two bathrooms.

Carman has been trying to fix the problems herself for some time, but things have started going wrong too quickly for her to keep up.

"I do a little bit at a time, buying what I can as I can afford it," she said. "I've applied for different kinds of assistance, but it just always seems like I'm too young or my house it too old."

When Carman first bought her home, she was working three jobs and would extra payments on her mortgage. Having done that, she said, has made it so that although her income has been reduced significantly, she is able to "live comfortably."

Now, she is grateful that there are people willing to step in to help her stay in the home she has invested so much time, money and energy in.

"This is a wonderful program," she said.

Vernon Sullivan of rural Cloverdale will also benefit from the generosity of Rebuilding Together volunteers this year. Sullivan lives in an old farmhouse he bought in 2006 with the intention of fixing it up. 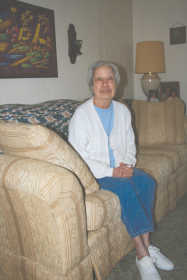 However, shortly after he purchased the house, his health began declining.

Sullivan, who receives medical treatment through the Veteran's Administration Hospital, suffers from neuropathy in his arms and legs. He has trouble walking and cannot stand up for long periods of time. He has also had heart problems.

Rebuilding Together volunteers have already installed a new furnace in Sullivan's home, and over the next two weekends will doing pump and ductwork, as well as electrical repairs. The floor in Sullivan's living room is also starting to sag, and volunteers are going to jack it up.

"All I had was a wood-burning stove for heat," Sullivan said. "It's getting too hard for me to cut the wood and haul it in."

Sullivan worked as a mechanic for many years. At one point, he owned his own shop. He retired in 1997 after an on-the-job accident "messed up my leg," and he has been on full disability ever since.

Sullivan's friends and neighbors have been helping him do drywalling and painting in his 11-room, two-story house, which sits on 12 acres. Sullivan is thankful for all the help he has received, and doesn't think without it he would have been able to stay in his home.

"This is it for me," he said. "I love this place. When the Lord takes me away, I want to be cremated and put on this land."