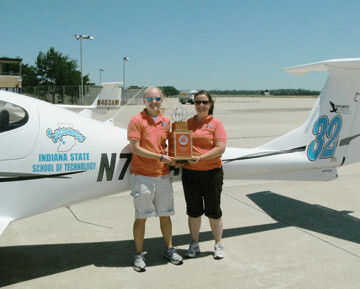 Jessica Campbell, left, and Victoria Dunbar stand next to the Diamond DA40 airplane with their trophy after winning top honors in the collegiate division of the Air Race Classic.

An air race covering more than 2,300 miles has ended in victory for a plane owned by Dixie Chopper Air and based at the Putnam County Airport.

The Air Race Classic covered 2,359 nautical miles flying throughout the central United States in a competition that handicaps each aircraft. Winning often depends on strategy such as finding a good tailwind and avoiding storms to make the best time.

Manufactured in Canada, the Diamond is built from composite materials, making the airplane both lighter and stronger. Powered by a Textron Lycoming IO-360-M1A engine capable of producing high speeds from the surface up to 16,400 feet, the Diamond enabled the Indiana State pilots to choose from a wide range of altitudes throughout the race.

"Neither of us had flown a Diamond aircraft before so we received a check-out flight from the chief pilot at Dixie Chopper, John Layne," Dunbar said. "The aircraft has the newer-technology glass cockpit, equipped with Nexrad weather updates so that should give us an edge over some of the competition."

Layne, impressed with the skill of the two pilots, thought all along they had a good shot at winning the race.

"The skills and training of those two is easily apparent by just how quickly they have taken to this new aircraft," Layne said before the race that ended in Atlantic, Iowa, on June 26.

Dunbar and Campbell were grateful for the opportunity to represent both ISU and Dixie Chopper Air in the historic air race first run in 1929.

"We really want to thank ISU, along with Dixie Chopper Air, for sponsoring us," Dunbar said.

While the ISU team was first among collegiate entries and earned a trophy and $3,000 cash prize, Dunbar and Campbell were second in the open competition. Overall, they finished just one point behind a pair of Michigan women.