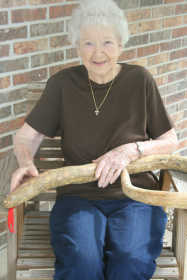 Avis Lawson enjoys gardening and has a wonderful sense of humor as evidenced by her "snake" gourd. She is growing vines that should be filled with all sizes of gourds this fall.

The folks living at Ivy Trace in Greencastle not only get a beautiful view from their large bay window, but get to enjoy luscious vegetables from the garden cultivated by Avis Lawson.

"I love the dirt being turned," said Lawson, who has lived at Ivy Trace for two years and has been working in the garden regularly.

Among the beautiful irises that line the area are tomatoes, zucchini, green peppers, cucumbers and even a banana plant. Her latest endeavor is the cultivation of gourds. She saw some at Beeson's in Danville that were dried and decorated like apples.

"I thought they were really cute," said Lawson.

She and Ivy Trace Manager Carol Newman performed "surgery" on a snake gourd of Lawson's in order to get more seeds.

The entire group of seniors living at Ivy Trace watched as the two cut a small square in the belly of the gourd and pulled out the seeds.

The women planted the seeds at the base of a stone tower in their front yard. The vines have flourished and are growing up and down the entire tower. 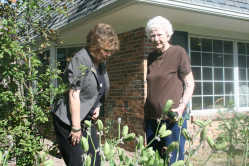 Ivy Trace Manager Carol Newman and resident Avis Lawson look over the zucchini plants in Lawson's garden. The residents of the home are already enjoying vegetables from the garden.

"They will grow into all kinds of shapes. Whatever way they lay on the ground is what they will look like," said Lawson.

"So, we'll have all kinds of varmints growing from our gourds out front," laughed Newman. "When they ripen, I hope nobody has a wreck looking at them."

Born in Lee County, Va. in 1918, Lawson has always worked on a farm. In 1940 she moved to Stilesville with her husband and children Alton and Kate. Her third child, Amy was born after the family moved to nearby Clayton.

Not long after Amy's arrival the family moved back to Virginia where they stayed until 1953. They came back to Indiana then. Lawson's husband began working at Chrysler until 1977 and she worked at RCA until 1976.

"When I first came here, I could barely walk down the hall," she said. "I had lost 30 pounds. Now I come out to the garden everyday. It gives me something to play around with and keeps me going."

"There is always laughter and occasionally music coming from her room when her family visits," said Newman.

Newman is also an avid domino player, and friends have witnessed her performing a "little dance" when she wins.

"The people here like Avis are an example for me," said Newman. "They really are remarkable."