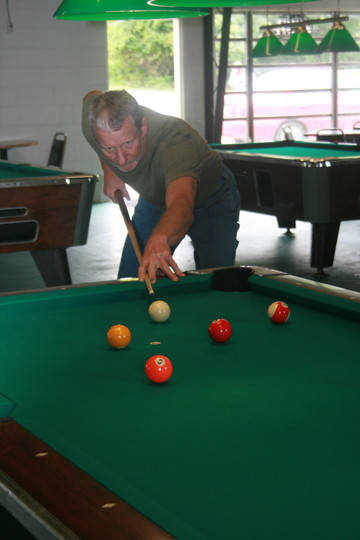 Max Phillips gets ready to put the nine ball in the center pocket at his new pool hall -- Herkimer's, that opened last week in Greencastle.
Order this photo

Owning a pool hall is something Max Phillips has wanted to do for a very long time. Last week, his dream came true when he opened Herkimer's Pool Hall.

It took 11 months to turn his building into a poolroom.

"I decided to go against common sense and open up. So many people have been asking for a place to play pool," explained Phillips.

"I wouldn't have this place if it weren't for my brother Kevin," said Phillips. "He helped me a lot and put real effort into helping."

With cement floors and tall warehouse style ceilings, a jukebox for music and a bar, Herkimer's has the perfect feel for anyone who loves a game of pool.

"We built it for the pool player who wants to come to a nice calm place and play," said Phillips. "It's not a bar. We serve beer and wine and sandwiches as a convenience to the people who come here to play pool."

Asked where the unusual name came from, Phillips laughs and says he was trying to think of something unusual.

"My mom use to have a dog. I don't remember it, but she always talked about it. His name was Herkimer. I thought it was a really different name but found out there is a Herkimer's in Chicago and in New York," he laughed.

Phillips plans to offer both dart and pool tournaments in the near future.

The traditional view of billiards is as a refined and noble pastime. There are hundreds of pocket billiards games. Some of the more well known include eight-ball, nine-ball, straight pool, and one-pocket. 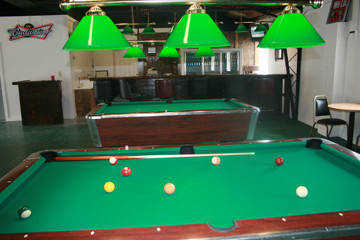 Phillips hopes people will come in and try out some of the many pocket billiards games, throw some darts and test their trivia knowledge on the Mega Touch screens. The cost to play is $6 an hour, and there are six tables available.