A tail-wagging, happily ever after tale 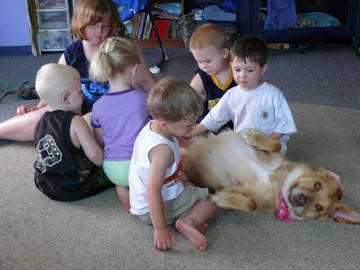 For months, Russellville Town Marshal Mike Biggs tried to capture a little gold dog running loose in the town. She was skittish and shy. Biggs could only get close enough to see the dogs' harness was embedded in her neck. She looked hungry and scared. He knew she needed help.

Eventually, he caught the dog and brought her to the Putnam County Humane Shelter, where she was gently nursed back to health. They named her Aries.

"She was very aggressive for about six days. On that sixth day, she began to cry for more attention. Shelter members had her temperament tested and took her to her first showing at a fundraiser at DePauw University. The next week she was adopted," said Humane Shelter Board member Lynn Bohmer.

A week later, the dog was returned to the shelter.

"The person who adopted her kept coming home to find her doors open and faucets turned on. She worked all day and couldn't deal with it," explained Bohmer.

When Anna Curran went to the shelter looking for a dog for her father-in-law, she noticed the little golden retriever mix.

"They told me her name was Aries and that she was really shy. She had been adopted but returned to the shelter. She had the saddest eyes and was so friendly with me. There was something special about her. I went home and called my dad and told him I saw a dog that he had to come and get," she said.

Curran already owned a bull mastiff, a long-haired dachshund, two cats, two ferrets, a turkey, goats and various other critters. She knew the little gold dog was a perfect match for her parents.

Curran's parents, the Robinsons, went to the shelter to meet the little dog. Aries came up and laid her paw on Marjorie Robinson's leg and immediately adopted the woman. The next day, she went home with her new family and a new name--Allie.

Curran and Robinson run a daycare in Cloverdale and it was important to both women that the dog gets along with kids. It turns out that was no problem.

"She's really protective of the kids. She knows who brings them and who picks them up. She's really leery if someone else comes to pick them up," laughed Robinson.

Allie is even more protective of Robinson, who has Multiple Sclerosis. Apparently, somewhere in Allie's previous life she was trained as a service dog. Because of her disease, Robinson sometimes stumbles when she walks.

"She fell one day and Allie came right up beside her and sat so Marjorie could pull herself up by hanging onto the dog," explained Randy Robinson. "She's her dog. She stays right beside her. If Marjorie leaves, Allie sits by the window until she comes back."

It's not just Marjorie or the kids at the daycare who Allie watches over. The center has eight new kittens and Allie has adopted them too.

"When one of them tried to slip away from the group, Allie just reached out with her paw and gently pulled it back," said Robinson.

"We haven't seen her turn on any water faucets, but when she wants a treat she goes her snack bowl and brings it to the kids so they can give her a goldfish," said Robinson. She is also whistle trained. One long whistle and she comes to you. Two short ones and she comes and sits a few feet away and waits."

Allie even has her own song at the daycare, sung to the tune of "Bingo."

The family is planning a vacation and it looks like Allie will be traveling with them. The Robinson's son Jeremy was watching over Allie while the family was gone for a weekend and Allie ran away from him.

"We know she doesn't like men with hats on," said Randy. Jeremy, who was wearing a hat, had to call his sister, who in turn called her parents who rushed back from Missouri.

"She stayed just out of my range. I could see her and she could see me but she wouldn't come to me, even after I took off my hat," Jeremy smiled.

"She is so hooked to Mom's hip, she doesn't like to let her out of her sight," said Curran. They are hoping to get Allie certified as a service dog so she can go anywhere with Robinson.

"I always know mom is safe if Allie is there with her. If she falls, Allie will help her up. When you put her on her leash, she walks slowly right beside you. She and Mom have something very special," concluded Curran.