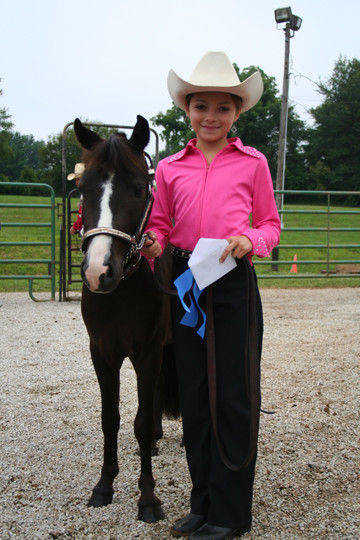 Eleven-year-old Katie Jo Beasley and her pony Magic make the perfect pair. Together they won the Western Showmanship Grade Six Wednesday morning at the horse and pony show.

GREENCASTLE -- Walt Disney once said, "All your dreams can come true, if you have the courage to pursue them."

It didn't come without work. After she dreamed of owning a pony, she pursued it by dropping clues to her parents Jim and Char Beasley.

Katie Jo would color and tear out pictures of ponies from coloring books.

"I would post them on the TV and different places around the house," she said.

Her efforts paid off last summer, when her parents bought Magic.

"I got him on my sister's (Lyndsie) birthday," she said.

Katie Jo found Magic at Quarry Creek. She thought he was the right size for her and that the price was right for her parents.

"I gave Mom hints that he was cheap," Katie Jo said.

She and 4-year-old Magic make a good pair. They entered the 4-H Horse and Pony Show for the first time this year and were named champions in Western Showmanship for sixth-graders.

"I was surprised we won," said Katie Jo with a smile. "He usually tries to make me mad."

Together, she and Magic took second place in the halter show for grades three, four, five and six.

The hard work didn't end when she got Magic. Katie Jo works with the 40-inch pony every other day.

"Ponies are more stubborn than horses," she noted.

She also entered home environment projects of a nightstand, lamp and trash can, which she found at yard sales and decorated herself; and microwave cooking -- brownies to be exact.

This is Katie Jo's third year to participate in 4-H.