From the track to the Pits 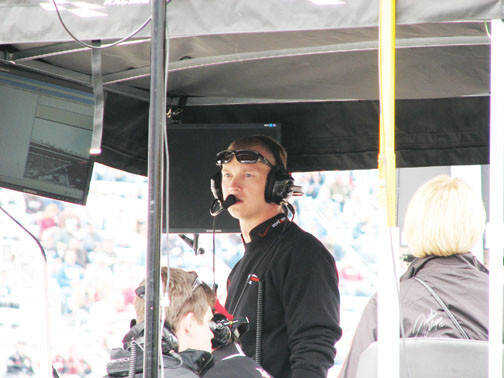 South Putnam grad Jonathan Hassler focuses in the pits of the No. 12 Penske Verizon Dodge driven by Justin Allgaier.

INDIANAPOLIS -- At eight years old, most children have no idea what they want to do when they grow up.

That wasn't the case for South Putnam graduate Jonathan Hassler. He knew what he wanted to do with the rest of his life after one weekend at a little go-kart track on the Putnam/Clay county line.

"My dad had some friends that owned a go-kart track in the west side of the county and he took me out and let me drive his friends kids' go-kart. A week later, my dad bought me my own." Hassler said. "I've been involved with racing ever since."

The young driver fit right into the family hobby of go-kart racing, -- when everybody else stopped racing he pushed forward.

"I was 13 when everyone else in the family stopped racing, but I didn't," Hassler said. "That is when I realized, one way or the other, I wanted to make a career out of it."

Hassler soon took his racing career to the next level and started racing 600cc modified sprint cars along with his go-karts, but soon found himself in a situation that many young drivers find themselves in -- the inability to move up.

"I did that for a few years, up until my freshman year of college, and we had to stop," Hassler said. "We couldn't afford to move up."

When he couldn't afford to race anymore, Hassler didn't give up on his dream of racing, he just modified the direction he was taking with it.

Then by either mere chance or a stroke of good luck, Hassler ran into someone who would forever change his life.

"About the time I quit racing go-karts, I ran into a guy at Purdue, where I was studying Mechanical Engineering, that I used to race go-karts with," Hassler said. "He got me involved with a late-model racing team that eventually led me into what I am doing now."

Hassler is now the chief engineer for the Penske Racing No. 12 Verizon Dodge Nationwide series car.

Now, instead of turning laps on a go-kart on a dirt track, he's going through 40-50 computer simulations each weekend, trying to get his team's car perfectly matched for the race track.

"I like to say that my job is to tell everybody what to do," Hassler said laughing.

One thing Hassler will tell you is, it wasn't easy getting were he is today.

During his freshman year at Purdue, he offered himself, free of charge, to a late model racing team in hopes of learning the aspects of the car.

"I worked for them for two years and then I went to another team and took four guys with me that knew nothing or very little about stock cars and told them that we would supply them with free labor for two years of racing," Hassler said. "They took the offer and ran with it."

That was the birth of Opportunity Motorsports at Purdue University, an organization the Hassler helped create to give other engineering majors a chance at a racing career.

The organization that gave Hassler the tools and training he needed to get a jump on his career.

During his junior year at Purdue, Hassler made the decision to make the jump from late model racing to NASCAR, so he packed his bags one spring break and flew to heart of racing -- Charlotte, N.C.

"Me and some of my friends went down there on our spring break and I met with some of the race teams down there and told them what I wanted to do," Hassler said. "Then one of the teams offered me an internship during my last year at Purdue."

After completing his internship, Hassler graduated from Purdue and packed his bags for Charlotte -- for good.

"I didn't have anything lined up yet for after school, so I was going down to Charlotte in hopes of selling myself to a team and landing a job," Hassler said. "Then the day after I graduated from Purdue, I got a phone call from one of the crew chiefs at Penske and he heard I was coming down that way and wanted to meet with me.

"It turned out that one of the guys that I worked with at Purdue, worked for Penske and put a good word in for me because he knew I was looking for a job," Hassler said. "After I met with the crew chief, a couple days went by and I decided that this is what I wanted to do."

It's been 18 months since Hassler started his career with Penske, and now he is back in his home state, trying to get his team its first win at O'Reilly Raceway tonight in the Nationwide race and he won't be alone. Hassler's older sister, Wendy, along with 20 or more friends and family will be there watching the race in the pits with him.

"We have a group of 24 people going to watch him race," Wendy said. "I've been to two other races, and both of them his team finished in the top five."

Wendy was in high school when her little brother started racing and she isn't surprised at what he is doing for a career.

"Honestly, we (the family) have always expected him to do something like this," Wendy said. "My parents bought an old semi trailer and that was Jonathan's race shop and he would be out there all the time.

"When everyone else quit racing, he kept going," she added "He would play in his football game on Friday night in high school and after the game, go pack up his gear and head for the track so he could race on Saturday."

Jonathan admits that he enjoys having the opportunity to make the car perform that best it can each week, but it is being in the pits that excites him the most.

"During the race, I'm in the pit box analyzing fuel mileage and tire wear and advising the crew chief on what strategy to take," Hassler said. "The real exciting part is when you are taking a gamble on when to take tires or fuel with 15 laps left.

"That's what really gets my blood pumping," Hassler said.

All in all, Hassler said that he feels fortunate to be able to work with such a great organization.

"I'm glad I went the route I did, because the way the economy is, some of those other routes aren't there any more," Hassler said.

The Nationwide race starts at 7:30 p.m. at O'Reilly Raceway Park and is broadcasted on ESPN.