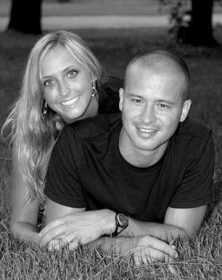 Meaghan Nicole Layton, Noblesville, and Capt. Gregory Nicholas Larkin, Indianapolis, were united in marriage on Sept. 12, 2008, at the home of the groom's parents.

The bride is the daughter of Jennifer Brooks and James Williams, Noblesville, and Stephen Layton, Indianapolis.

The groom is the son of Dr. Gregory and Lisa Larkin.

The bride is a 2006 graduate of Lawrence North. She attended Indiana University-Purdue University, and currently is a student at the Defense Language Institute in Monterey, Calif.

The groom graduated from Brebeuf Preparatory in 1998. He is a graduate of Indiana University-Purdue University (2003) and the United States Naval Academy (2005).

Capt. Larkin completed a 14-month tour of Iraq, followed by completion of Airborne and Ranger's training. He is completing a master's degree in Russian, at the Defense Language Institute, in Monterey.

The Larkins are currently living in Monterey. Upon completion of their education, they will return to their home in Lillington, N.C.

Capt. Larkin is in the U.S. Army Intelligence Corps at Ft. Bragg, N.C.

On Sept. 12, 2009, a dinner reception, in their honor, will be held at Allison Mansion, Marian University, Indianapolis.