GREENCASTLE -- Just after 8 a.m. on Saturday, business is brisk at farmer's markets all around Indiana, including the Putnam County Farmer's Market in downtown Greencastle.

Angie Moor has already purchased cinnamon rolls, bags of fresh green beans and cucumbers and is looking at tie-dyed shirts. Moor comes to the market most Saturday mornings to pick up fresh produce. 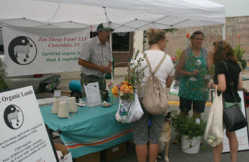 "When you go to a grocery store, you're looking at this beautiful food, but you don't know what's been done to it," said Moor. "When you're standing in a farmer's market you can stand on one side of the table with the farmer who grew those fruits and vegetables."

According to the U.S. Dept. of Agriculture, over a 10-year period ending in 2006, the number of farmer's markets in the US has doubled to roughly 5,000. Consumers cite meeting producers and enjoying a wide array of fresh food as perks of shopping at the farmer's market.

Today, not only are long-standing farmer's markets being rediscovered and revitalized, brand new marketplaces that add entertainment and art are cropping up.

This is certainly the case in Putman County, where musicians like Doug Cox, Ron Dye, Randy Salman and Eric Edberg entertain as customers leisurely stroll among the booths.

Whether it's due to an increased demand for organically raised and local farm-fresh food or just the unique experience of such a marketplace, farmer's markets are more popular and plentiful than ever.

These markets are an ancient method used by farmers worldwide to sell their produce directly to consumers. As U.S. food production became increasingly industrialized and specialized, farmer's markets were replaced by brokers and supermarkets.

In the past two decades, however, farmer's markets in the U.S. have rapidly regained popularity.

There are a number of advantages in selling at farmer's markets. By selling directly to their customers without going through middlemen, farmers can charge retail prices for their produce.

A farmer's market is a good place for new growers who are perfecting production skills and learning which products customers want most. In addition, many growers enjoy the interaction with customers and other vendors.

For customers, too, the farmer's market is not just a place to buy food, but a social affair. A festive atmosphere helps to bring people to markets, where they can talk with farmers about how the produce was grown and how it can be prepared. 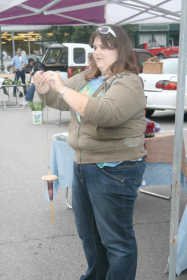 Elizabeth VanHook demonstrates the art of hand spinning yarn at her booth at the Putnam County Farmer's Market. VanHook hangs a sign in her booth telling visitors she is raising money for her schooling.

Thomas and Nancy Zennie of Cloverdale were offering bite-sized pieces of their organically grown lamb that had been marinated before cooking.

The products all come from their farm. The Zennies talked about what is known in organic farming as an audit trail. Any piece of lamb purchased from their farm has a number on it that indicates exactly what lamb it came from.

"We know exactly where each piece of meat comes from," Tom said. "We can trace the number."

The addition of arts and crafts vendors has been a positive move. Shoppers can find jewelry, handmade soaps and greeting cards as well as tie-die T-shirts.

Lori Manning's booth is generally busy where she sells tie-dyed shirts. Her colorful booth drew in a family driving through Greencastle on their way home to Crawfordsville.

"My daughter saw these shirts from the street and had to get one," smiled Tom Mylan. He and daughter Gina also stopped by Chief's Restaurant booth to pick up a breakfast wrap.

As the popularity of farmer's markets continue to grow, vendors are also reaching out for even more customers. Some markets are beginning to accept food stamps and participate in other food assistance programs, making it easier for those in need to also shop for fresh and local produce.

While accepting food stamps at these stands has been approved for some time, the program was limited because the federal government in 2004 replaced the traditional paper food stamp coupons with debit cards that had to be processed through electronic terminals.

The system is expensive, costing about $1,100 for each terminal, plus monthly fees. Since the majority of farmer's markets operate outdoors with no electricity, they have not had a means to accept the stamps.

Over the past five years, though, states and the federal government, with help from nonprofit organizations, have made hundreds of thousands of terminals available at farmer's markets.

"It opens up the market to a whole new clientele, and it allows the recipients better access to better foods and fresh foods," said Jane Aiudi, director of the market and production development division of the Agriculture Department.

As of the end of the 2008 fiscal year, 753 farmer's markets nationwide had accepted food stamp benefits, a 34 percent increase over the previous year, according to the federal Agriculture Department. Sales to customers using food stamps at the markets totaled $2.7 million in the 2008 fiscal year, the most recent period for which records are available.

Those who advocate expanding the program say that doing so is crucial to encouraging the purchase of healthy food.

Most experts agree that a number of things must come together to make a farmer's market successful. The most important thing is to have successful vendors.

For customers, the cardinal rule is arriving early, since some markets sell out fast.

"We come early whenever we want cinnamon rolls or else they are gone," said Moor. "It's just not a good Saturday without fresh cinnamon rolls."

The Putnam County Farmer's Market is open from 8 a.m. to noon Saturdays. It is located on the north side of the courthouse square.