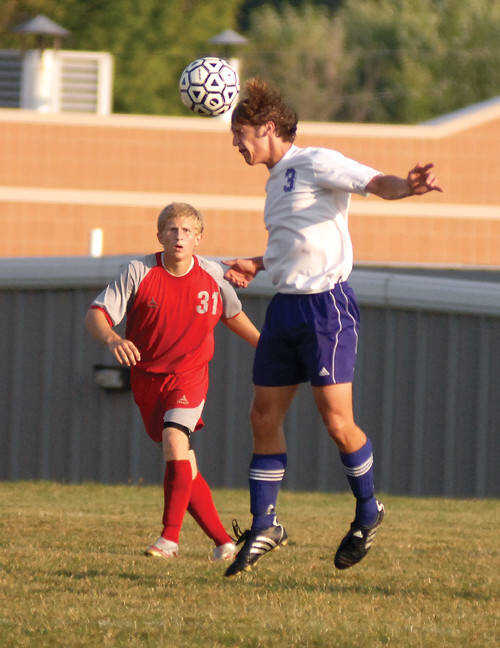 Greencastle's Cody Watson blows past Southmont's Erik Garcia to poke the ball away from the Mounties Curtis Rose in Tuesday home match. The Tiger Cubs came away with a 7-0 victory.

GREENCASTLE -- It's all starting to come together for the Tiger Cubs soccer team -- at least head coach Dave Lilly hopes so.

"I didn't think this game would have gone this way," Lilly said about the Tiger Cubs win over Southmont. "They came into this game undefeated and our offense has been lacking until our last game against Terre Haute South. I think that game got our scoring confidence up."

At the half, vGreencastle had a 1-0 lead, thanks to Evan Smith, but as soon as the second half started that lead grew.

Within the first 34 seconds of the half, Mitchell Ball took a pass from Spencer Moore and put it past the Mounties keeper for a 2-0 lead. Seven minutes later he did it again this time Mitchell got the assist from David Cath.

"The second goal within the first minute of the second half was key for us and that really cracked opened the game," Lilly said. "They were working us hard with that 1-0 lead and after the second goal our energy went up and theirs went down."

Knowing that the Mounties didn't have any subs to put in, Greencastle continued to rotate fresh players in and continuously put pressure on the Southmont defense.

"We can go five or six deep and not have our level of play drop off and that's good," Lilly said. "Southmont had three guys sick and another go down in the first half, so they didn't have any subs for the second half and that makes a difference.

"When you can bring in five or six guys off the bench that contribute, that a good thing," Lilly said. "We had several different score tonight and many others with assists."

Greencastle extended its lead to four at 25:39 mark, when Spencer Moore put the ball into the air for a Brandon Query header. One minute later, Luke Smith scored on a pass from Cath. Then less than two minutes later Greencastle scored its sixth goal of the night when Sonney Basham fired Query's pass right past the Mounties goalkeeper.

The Tiger Cubs got their last goal of the night when Query scored on a penalty kick with 16:14 left.

"I hope that the last two games are the result of us starting to play better as a team and or offense coming together," Lilly said. "We are starting to see the same guys step up and score. Some of the guys that I expected to add to the attack this year have been absent the first few games, but in the last two games we've started to score some goals.

"We are finally starting to come together and I hope it continues," Lilly added.

Greencastle is back in action on Thursday when it takes on North Putnam at 5 p.m.

Next match -- Greencastle is back in action on Thursday when it takes on North Putnam at 5 p.m.