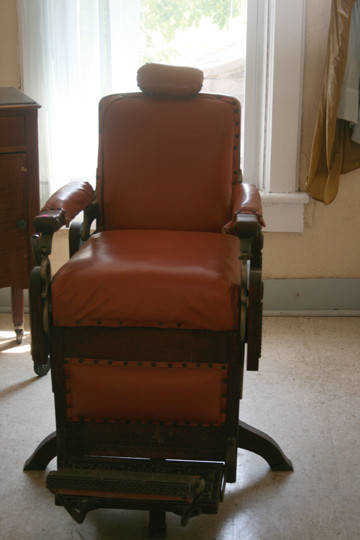 This old barber chair from Koken Barber Supply Co. in St. Louis is housed on the second floor of the old County Home and may soon be up for auction.

The current plan is to auction off items in the building as well as land parcels surrounding the building. What to do with the building itself is still a puzzle.

"We need people to give us their ideas," said Commissioner Jim Baird. "We're getting down to the wire here and need to hear what people think can be done with it."

Earlier this year, the commissioners cited budget constraints and just five residents as factors in their decision to close the 140-year-old facility.

Commissioners were presented with two bids for auctioneer services for items at the home. They are trying to determine a possible date and are still accepting auctioneer bids.

"I'd like to get some other bids besides these two," said Baird.

County Planner Kim Hyten heads a group that has been inventorying all the items in the home.

The Putnam County Jail received most of the food items that were still at the home, with the Emergency Operations Center also receiving a few items.

Non-food items such as cleaning supplies, refrigerators and paper products were disbursed to the County Annex and Courthouse, in addition to the EOC and jail.

Additionally, a long list of all furniture, electric items, dishes and other non-food items has been put together with the intention of auctioning them off in the near future.

Representatives from the Putnam County Museum presented a list of items they feel have "historic" value and should be preserved and displayed at the museum.

These items included an old Koken Barber's Supply chair, signs with the facility's name on them, an old Royal typewriter, the old dinner bell and some of the State Farm hickory furniture.

"We think these things should be preserved. They have historic value and we can have a display at the museum," said Mavis Broadstreet, past board member at the museum.

"I remember going out to the county home when I was a young girl and that barber chair was always there," she recalled. "These items are important to the history of the county. We'd like to have them."

Baird joked with Broadstreet, saying he would like to give the home to the museum. 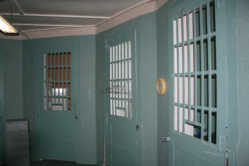 These old doors still lock. They are part of the old county jail that once was housed at the county home. It is believed to be the oldest jail in the county.

Gick told commissioners there might be grant money available to do a study on what kinds of things could be done with the home. He also emphasized the importance of maintaining the integrity of the building by keeping things like baseboards, doors and doorknobs in place in the building.

"It's important to keep some acreage with the building as well," he said.

Hyten told the Banner Graphic he believes at least four acres will remain with the building because of septic and maintenance issues. The rest of the acreage will be parceled and probably sold.

Hyten also suggested commissioners might want to talk with Putnam County Sheriff Steve Fenwick about possibly moving the jail annex at the home to somewhere near the new jail.

"We believe it is the first jail operated in the county," said Hyten. "Maybe some club or organization could help find a way to move it."

Some suggested uses for the home received by the Banner Graphic have included using it as an eastside Greencastle Fire Department, future location of the courthouse annex, future site for ResCare, a community youth center and a Bed and Breakfast.

Commissioners want to get the plans for the facility finalized. They took bids for the auction of items under consideration along with the museum's request for items.