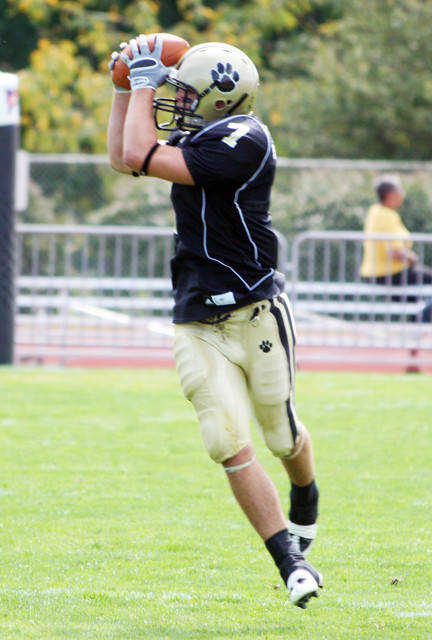 Brayden Dahlstrom hauls in one of his career-high 10 catches in Saturday's contest against Centre.

GREENCASTLE -- It took three and a half quarters for the DPU Tigers football team to display the offensive prowess they displayed in week one. But it was too little too late, as DePauw fell to Centre 34-24 Saturday.

DePauw struggled over the course and wasn't able to get into a rhythm until after starting quarterback Spud Dick was knocked out of the game early in the fourth quarter.

The Tigers were staring at a 27-3 deficit going into the half, with their only scoring coming from a 25-yard field goal by Ethan Schweir.

It was clear that something had to change in the second half, but the third quarter displayed the same stagnant offense of the first half and after three quarters, the Tigers' still displayed three on the scoreboard.

It was a big hit on their star quarterback that awoke the mighty Tigers.

Early in the fourth quarter, Spud Dick completed two consecutive passes, but on the second completion, Dick lay motionless on the field. After a brief delay in action, Dick stood on the sideline, while backup quarterback Michael Engle took to the gridiron.

Engle sparked the DPU offense and at the 9:36 mark, runningback Jon Ellis scored from one yard out to give the Tigers' their first touchdown of the day.

On their next possession, Centre rusher Jonathan Pinque fumbled the ball at the Centre 45 yard line and the Tigers didn't waste any time striking another scoring blow.

Engle went under center, dropped back and hit Alex Koors for a 45-yard touchdown strike, bringing the once quiet crowd to a roar with 6:38 left in the game. Engle and Koors connected for the two-point conversion.

The Tigers' got the ball back at the 5:42 mark and began yet another touchdown march.

It looked like the Tigers drive had stalled as they faced a fourth and six at the Centre 31. Forced to go for it, Engle rocketed the ball to the sideline where wideout Brayden Dahlstrom snagged the pass and gave DPU the first down. Engle and Koors hooked up again on the next play for a 20-yard touchdown, bringing the score to 34-24 in Centre's favor.

DePauw had one final chance to put points on the board, but an interception by Brian Sneed in the endzone ended the drive and the game.

Next game -- The Tigers will hit the road to face Sewanee Saturday at 2:30 p.m..