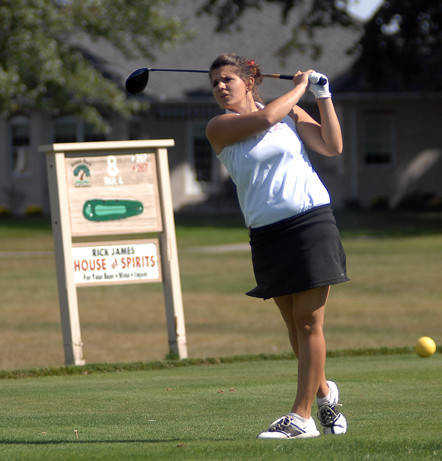 Eagle golfer Heather Hughes will make her third trip to the regional after posting a 78 at sectional.

BRAZIL -- Coming off a solid performance at the Putnam County golf match, South Putnam's Heather Hughes had her mind set on one thing --getting out of sectional.

Hughes fired a 78, tying her best 18-hole score of the year, in the Northview golf sectional Saturday afternoon, earning her a trip to Martinsville for regional.

Joining Hughes in Martinsville with be teammate Grace Aker and Greencastle's Chelsea Samuels.

"I'm just really excited that I shot that," Hughes said after the match. "The only thing that wasn't really working for me today was my driver. My irons felt good and my putting was really good today too."

Hughes recorded three birdies, two on the front nine and one of the back. At the turn, Hughes was only one over par with a 37, but a couple of double bogeys on the back nine raised her final score to five over par. In reality, Hughes was only two strokes off the medalist score of 76, posted by Terre Haute North's Rachel Welker.

This will be Hughes' third and final trip to the Martinsville regional. Fellow Eagle Grace Aker posted an 88 for the day, securing the second lowest score on a non-advancing team.

"I didn't see this one coming after my score at the county; actually, I don't think anyone did," Aker said about advancing.

When she was asked what she thought the difference was between her performance at the county match and the sectional, she said it was a mental thing.

"I think my mental game was off at the county match," Aker said. "And after I got that back and focused on every shot today (Saturday) I did a lot better."

When the question came up of what was next on her list, the answer was to get out of the regional.

"I don't know if I will get out of the regional, but I also didn't think that I would get out of this sectional either, so you never know what will happen," Aker said.

SPHS coach Debbie Steffy couldn't have been any happier for her two golfers.

"These two, they worked hard all year long and they deserved this. I look forward to working with them another week and going to Martinsville with them," Steffy said. "I'm happy for them especially with them being seniors. This is a nice way for them to go out of their high school careers."

Steffy was really proud of Aker for making it out after the troubles she had at county.

"Grace had a rough night the other night at the county match, so this is a testament of her character to come out here and put it together and play well," Steffy said. "And Heather did a great job of carrying over her success from the county to today and like I said, I am happy for them and hopefully our juniors will see this and thinking about this being them next year."

South Putnam wasn't the only school to send a golfer to Martinsville.

Greencastle's Chelsea Samuels posted a 90 for the day and made the cut by a stroke.

"Chelsea had a really nice round on the front and it could have been better, but a couple putts lip out on her. She even stuck her driver on the fourth hole on a par four. She drove right onto the green and it got stuck in a divot and she lipped the eagle putt," GHS coach Brad Kingma said. "She came out iffy on the back nine and had a couple of three putts and then came back with a birdie on No. 14 and I thought ok she'll be fine. But then she tripled the next two holes and ended with a 50 on the back nine and 90 overall, but she got through.

"This wasn't Chelsea's best year. She has been struggling, but hopefully we can go to regional and do better. She has a score from last year that she wants to beat and hopefully she does," Kingma added.

"Robbie Urton is a junior and this is her first year coming out and she came into this high pressure situation and shot a 108 and I can't ask for more to be honest with you, " Steffy said. "The other girls played well too. Cierra Perry, I know would have liked to be in the 90's and she was off from that, but she played well."

Even though he doesn't have anyone advancing to the Martinsville regional, CHS coach Ken Williams wasn't totally displeased.

"We played OK, we didn't play great. We played great recently, but we didn't today," Williams said. "Boyette placed two of her scores in the 40's and she would have been thrilled with that a few weeks ago, but not today.

"Right now this is just an OK round for the way we have been playing," Williams added. "I don't know, maybe we used it all up since last Saturday and this past week and I mean we placed fifth as team with a 375, so we're not terribly disappointed."

Greencastle finished sixth overall with a combined score of 406 and Kingma was happy with that.

"We knew as a team we weren't going to get through, but we are still really pleased," Kingma said. "The girls are really excited and in fact they are kind of disappointed, because they wanted to do better.

"The girls played well, but realistically we were looking at a fifth or sixth place finish and we got sixth," Kingma added. "But every girl on the team had one of their best nine hole rounds today and this gives us something to build on for next year, since all of the girls are coming back."

North Putnam made its appearance in the sectional this year, the first time in three years, and finished 10th with a score of 445.

"I think the girls did great for this being their first sectional," NPHS coach Linda Patrick said. "We are a young team and my girls were happy with their scores. We cut 48 strokes off our score from conference a week ago.

"Overall the girls were pleased with their scores," Patrick said. "We experienced the sectional this year and now we know what to expect next year when we come out here."

Hughes, Aker and Samuels will compete at the Martinsville Regional Saturday at 10 a.m.

Next match -- Hughes, Aker and Samuels will compete at the Martinsville Regional Saturday at 10 a.m.