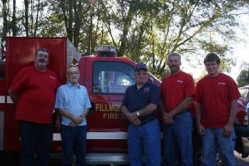 FILLMORE -- Fifty years ago, the Fillmore Volunteer Fire Department needed a firehouse. To make it happen, a group of 11 firemen decided to have a fundraiser.

"Everyone had a fish fry," said Curt Smith, "so, we had a barbecue."

Smith, now 82 years old, is one of the original firemen who started what is today's largest barbecue in Indiana. He returned this year to help celebrate the 50th year. As a result of that barbecue, the tin shed next to the Post Office was built to serve as the firehouse. Smith even designed it.

However, the two days worth of food -- chicken, baked beans, cole slaw and homemade pie -- turned out to last only two hours. The barbecue began at 5 p.m. that first day and by 7 p.m. the group was completely out of food.

"We went through 200 chickens in two hours," Smith recalled with a laugh. "It was the biggest crowd in Fillmore."

Firemen from Rockville, Greencastle, Cloverdale, Bainbridge and just about every other surrounding community went in search of more chickens and cabbage for slaw.

"We took cabbage from people's gardens," Smith added. "We had the local grocery store opened to get more food, too."

Today, the barbecue takes more than 500 chickens and the menu has grown to include hamburgers, hot dogs, fish and tenderloin sandwiches. In addition to the slaw and baked beans, French fries and fried mushrooms are served.

"All the pies and cakes are still made and donated (by local women)," noted current Fillmore fire chief Mike Davies.

The original event was held in front of the firehouse in an 8x8 tent. That tent is now a 60x90 and held behind the firehouse in downtown Fillmore. A committee led by the fire department's president Bob Bills undertakes the planning.

After 50 years, has become a place for the community to gather, visit and have good food.

"I never thought it would continue for 50 years," said Smith, who is the only surviving member of the original crew. "I got to be here for it."

While some aspects of the barbecue have changed, the goal remains the same -- to build a new firehouse. The crew hopes to build a firehouse big enough to hold the barbecue inside. They feel certain the goal will one day become a reality.

"The community never lets us down," said Davies.