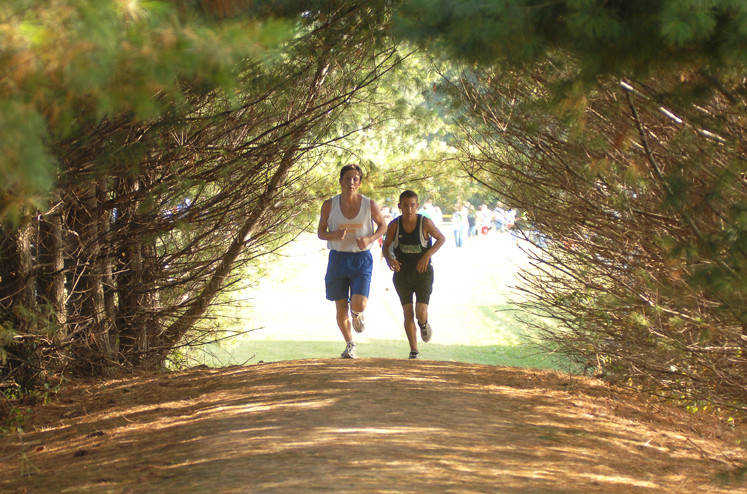 Joe Rumley tries to catch up with Lighthouse Christians runner in the early part of the race Monday. Rumley finished second overall with a time of 19:22

GREENCASTLE -- It was a split between the South Putnam and Cloverdale cross country team's Monday afternoon.

South Putnam claimed the prize in the boys' competition 24-35, while Cloverdale did the same in the girls' race 25-30.

"I have to say that Joe is one runner that comes to practice determined to get better and it's showing," CHS coach Katie McLaughlin said. "He is only a freshman and look how he is competing with everyone else in the county. He has been a real surprise for the boys team this year."

Kyle Chambers was the next Clover to cross the line, as he finished the race in fourth place with a time of 20:07.

"Kyle was right behind Joe," McLaughlin said. " I wish he would try a little harder and I think he has more in him, than he wants to give.

"Kyle is more of the vocal leader of the team and I think the boys are doing a great job," McLaughlin said.

It looked like that Cloverdale was going to take the win in the boys race after Rumley and Chambers finish, but when the Eagles finished fifth through eighth, everything changed.

"Our times weren't the best of the year, but at this time of the year, with some of the workouts we have been doing, I don't think our times are going to be the best," SPHS boys coach Brian Gardner said. "But I'm pleased that we were able to win and I thought our guys were competing and ultimately at the end of the day you look to see if your guys competed and that's what they did."

"Amilla is another freshman and is starting to come around and listen to some of the things that I have to say and maybe starting to realize that I might be right in a few areas," McLaughlin said. "I was proud of her today and I think her time could be a little better, but as far as the pre-meet preparation goes, what she did was far better this meet than any other meet.

"I'm glad she finally took my advice because it showed on the course. I mean she was running right in packs of boys," McLaughlin added. "Claudia did well too. She had a South Putnam runner right in front of her for most of the race until the end where we told her she could pass her and she did. She busted up that hill and she ran away with and I was excited to see that."

"Well our times surprised me," SPHS girls coach Elaine Bye said. "I thought they would be a little faster, but we had a really hard workout on Friday and they got to see what kind of pace the need to run in conference and sectional and they did a great job today. They went out and competed."