Relive 5 decades with a Hollywood icon 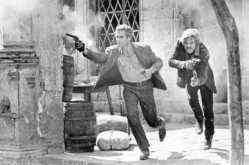 Butch Cassidy and the Sundance Kid is one of 13 movies included in The Paul Newman Collection released by 20th Century Fox Home Entertainment. Newman (left) is shown above with Robert Redford. (Courtesy of Twentieth Century Fox)

For five decades, Paul Newman thrilled audiences with the everyman quality he brought to his characters and the simple elegance he displayed in his private life. With 20th Century Fox's released of The Paul Newman Collection, fans can once again revel in the roles that helped define a legend.

It is comprised of 13 flicks that show the range and evolution of an actor than continuously and successfully reinvented himself. The range goes from an arrogant pool ace (The Hustler) to a washed up, alcoholic lawyer (The Verdict), to a once sleek Hudson Hornet (Cars) and everything in between. We get to see Newman as hero, villain and comedian and in every incarnation viewers are mesmerized by the performance.

The three stand out films of the set for me is The Hustler, Butch Cassidy and the Sundance Kid and The Verdict.

The Hustler was the film that introduced me to Newman at a young age. It's unbelievably easy to pull for a character who seems to have no redeeming qualities. Not only does he work the table, but also the audience. With each sly glance, each arrogant head nod and each swill from the bottle; Newman knows he has us every step of the way and loves it.

It was the comedic element to Butch Cassidy and the Sundance Kid that showed another way the actor could endear himself to an audience. It had been revealed early in films such as Rally 'Round the Flag, Boys! and What a Way to Go, but is was in Cassidy where the balance was perfect. His recipe for success in the film was the delicate balance of being a little bit dramatic and a little bit of a smart alack, and Newman had just the right amount of personal orneriness to get the job done.

Newman was more than an actor. In supplemental materials, it discusses his work as a philanthropist who has donated millions to charity, his interest in politics and his affinity for practical jobs. Newman was a deeply private man whose legacy in Hollywood will stand the test of time.

The collection has 17 discs (13 movies) and a 136 page soft-bound book filled with pictures, excerpts from each film and personal quotes from the actor himself.

Final Cut: A stunning collection of films from one of the most versatile actors in cinematic history. Whether you want to laugh or cry, The Paul Newman Collection has something for everyone. Perhaps the single best collection I've seen. A must for any Newman fan.

* Butch Cassidy and the Sundance Kid

* Buffalo Bill and the Indians or Sitting Bull's History Lesson

* Hemingway's Adventures of a Young Man

* Rally 'Round the Flag, Boys!