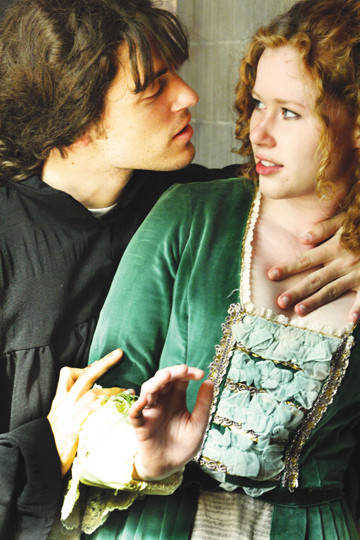 That line, spoken by the title character in Moličre's "Tartuffe," is probably the most honest line he ever utters.

The character of Tartuffe is an embodiment of the religious hypocrisy that permeated France during the reign of King Louis XIV.

Set in pre-revolutionary France, "Tartuffe" is a clever commentary on how people are willing to give up everything for the chance to be in the presence of godliness.

Jared Norman is perfect in the lead, giving Tartuffe a truly smarmy edge. He stalks about the stage in his long, black robe, wearing a huge cross around his neck.

Emily Terrell plays delightfully trashy and outspoken housemaid Dorine, who provides much of the play's comedy.

Other stellar performances are turned in by Alexander Thompson as the na*ve and captivated Orgon, Laura Durham as Orgon's wife Elmire and Katie Sink as the weepy, eager-to-please Mariane, Orgon and Elmire's daughter.

Arguably Moličre's most famous play, "Tartuffe" was written and first performed in 1664 in Versailles. It was almost immediately censored by King Louie XIV, and was banned from being performed at all for five years.

What amazed me about the play was that although the story took place in 17th century Paris, many of the themes are just as applicable in the present day.

"One timely message of the play is to recognize the difference between true piety and hypocrisy," said director M. Susan Anthony.

The lives of Orgon and his family are turned upside down by the appearance of Tartuffe -- a vagrant who claims to be a man of great prudence and piety.

Orgon decides his meeting Tartuffe is an act of God, and invites the stranger into his home.

Turns out Tartuffe is a con artist who is after all of Orgon's wordly goods, and also lusts after Orgon's wife.

Orgon is a devoted family man and affluent member of French high society, is married to Elmire. He is the father of the nubile Mariane and a son, Damis, who he disowns when Damis refuses to agree that Tartuffe is a pious man.

While most of Orgon's family (with the exception of his mother Madame Pernelle), friends and house staff see through Tartuffe's machinations, Orgon remains convinced that his guest is a man of high moral character.

By the time Orgon catches on, he has already signed his estate over to Tartuffe -- as well as promising the con man Mariane's hand in marriage.

So who wins this battle of good versus evil? You'll have to see the production to find out!

"Tartuffe" opens tonight at 8 p.m. in Moore Theatre of the Judson and Joyce Green Center for the Performing Arts.

Additional performances will be staged on Friday and Saturday at 7:30 p.m. and Sunday at 2:30 p.m.

The audience for tonight's performance can take part in an opening night celebration, which will include a talk back session with cast and crew following the show. On Saturday audience members may stay after the show to discuss the play with the cast and crew.

Tickets for "Tartuffe" are $3 for students and $6 for adults and are available at the DePauw University Green Center for the Performing Arts Center Box Office. Call 658-4827 or e-mail greencenter@depauw.edu