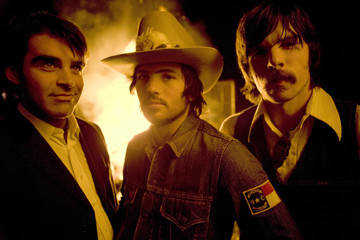 After eight years of touring and recording, the Avett Brothers, from left, Bob Crawford, Seth Avett and Scott Avett, released their major label debut I and Love and You Tuesday on Columbia Records. (Courtesy of Crackerfarm)

Longtime fans of the Avett Brothers could easily ask one question of the band's major label debut, I and Love and You, released Tuesday on Columbia Records -- Where's the banjo?

Darlings of the stringband scene for the bigger part of a decade, the Avetts have, indeed, expanded their sound for the new record. This time around, they opt for piano-driven balladry for the biggest portion of these 13 new tracks.

The result of this bold move? The Avetts and producer Rick Rubin have made the best album this music fan has heard in 2009.

The piano-heavy sound was hinted at on 2007's Emotionalism. "Salina" and "Go To Sleep," two of the more memorable tracks, featured piano next to guitar, banjo, bass and fiddle. The mix was outstanding two years ago, so adding more piano this time around was a logical step.

With the new album, the Avetts are at a treacherous place for a band on the rise: How do you attract the bigger audiences that come with a major label deal without alienating the fans who got you here in the first place? And, by the way, you should also show signs of artistic growth while not abandoning what got you here.

The new record delivers on all counts. Rubin has helped the band harness the energy of its live shows and earlier albums into a crisp, clean album that retains the urgency always associated with the group.

And how do you keep the old fans? Keep writing good songs and singing those sweet harmonies.

The songwriting and singing of Seth and Scott Avett have always been at the center of this group's success, and that doesn't change here. The songs are often simple love songs with a deeper wit and meaning to them.

The title track, while nominally about how tough it is to say those three little words, is also a sort of love letter to longtime fans and supporters. When Seth croons "We are headed north," everyone know what this means -- the big leagues are calling. The Avett Brothers aren't just North Carolina's treasure anymore.

The song is sad yet victorious, looking back while stepping forward. It's the perfect way to begin this album. It tells the old fans, "We still love you, but we have to do this."

In reality, the band headed west to record with Rubin in Malibu. Was it California that produced the evolved sound? Was it Rubin? It seems more likely it was three men, the two Avetts and bassist Bob Crawford, reaching musical maturity and knowing it was time to make this record.

Just listen to the songs. Tracks like "The Perfect Space" and "Head Full of Doubt, Road Full of Promise" are about the transition from youth into manhood. With Scott and Crawford both over 30 and Seth approaching the milestone, it seems to be a theme preoccupying the songwriting.

After writing the lyrics, Seth and Scott have also always had a knack for delivering them perfectly. Theirs is that brotherly harmony in which two distinct voices get tangled up into one, beautiful voice. It may not take the same DNA to harmonize this well, but it certainly helps.

"Ten Thousand Words" is a great example of the two voices working wonderfully together, as Scott sings the chorus with Seth a couple beats behind, singing a sort of countermelody echo. At the right moments, the voices of these two just give you chills.

The group also seems ready to take that next step in that there are, among the balladry, some apparently radio-friendly songs. "Kick Drum Heart" is catchy, fun and danceable. "Slight Figure of Speech" also fits this mold.

And for the diehards out there, the bluegrass isn't totally gone. "January Wedding" is a traditional-sounding tune that would have fit in nicely on any of the group's previous releases. "Laundry Room," while one of the album's most poignant piano tracks for nearly four minutes, features a wonderful fiddle-driven outro that reminds us these boys are from North Carolina.

This record has it all: great songwriting, outstanding instrument work and killer vocals. Releases like this are what a company like Columbia dreams of when it signs a band like the Avett Brothers.

If you don't like good music, then I you should avoid this one. For everyone else, pick it up.

I and Love and You is the best new record I've heard in a long time. There may be three months left in 2009, but it's going to take a major upset for this not to be No. 1 on my list come Dec. 31. The Avett Brothers deliver everything expected with this record and a whole lot more.

I and Love and You