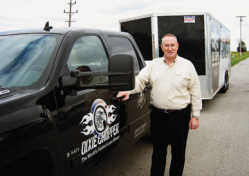 Certainly it is no stretch of the imagination to suggest Dixie Chopper President Gary A. Morgan has gone out of his way to excite and reinvigorate the more than 500 dealers who sell and service Dixie Chopper lawn mowers.

In fact, Morgan went way, way out of his way recently, spending five weeks on the road in a unique "grass routes" effort designed to demonstrate Dixie Chopper's commitment to a successful 2010.

Over a five-week period that began Aug. 24 on Dixie Chopper's home turf in Greencastle, Morgan endured a grueling schedule covering 22 meetings in 17 states.

In driving truck and trailer to each of those locations, Morgan traversed more than 7,000 miles (7,099.6 to be exact), consuming 738.1 gallons of diesel fuel and more restaurant food than even Bob Evans could imagine. Mileage over the excursion computed to a 9.6-mpg rate (don't even ask how to figure that in acres per hour!).

"Undoubtedly, the time and energy spent on this venture has been well worth it," Morgan stressed following his return to company headquarters in Fillmore. "I would like to thank the dealers for their interest and participation in our recent 'grass routes' effort. I enjoyed getting to meet our dealers, and sharing information and ideas with them as we traveled across the country."

Overall, Morgan spent 132 hours, 31 minutes behind the wheel as he passed through 25 states (some more than once) while spreading the 2010 Commitment message and marking his first anniversary as Dixie Chopper president and CEO.

He even kept a logbook, like any over-the-road trucker -- just in case transportation authorities might stop him along the long and winding road.

Most of the time a tight schedule meant jumping back into the truck after a meeting ended in late afternoon and hauling five or six hours or more down the road to the next destination. But Morgan assures it was all worth the effort.

"Getting to know our dealers and their wants and needs will undoubtedly assist me in helping Dixie Chopper better service their dealerships now and in the future," Morgan said. "Already some of the suggestions received from dealers are being put into practice by Dixie Chopper departments."

As dealers learned at the Commitment 2010 meetings, the new model year will see the introduction of the Dixie Chopper CAT diesel and the compressed natural gas-powered CNG Eco-Eagle, as well as the new Magnum Series powered by Briggs & Stratton Pro Series engines.

Dixie Chopper will mark its 30th anniversary of manufacturing "The World's Fastest Lawn Mower" in 2010.

The company produced its first zero-turn mower on April 15, 1980 in an old dairy barn on the property of founder Art Evans' parents near Fillmore.