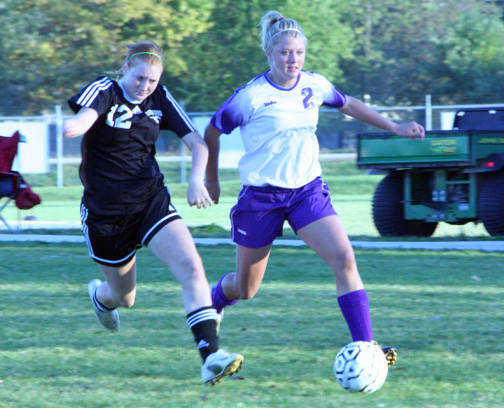 GREENCASTLE -- The Greencastle girls' soccer team held on for a 3-2 win over visiting Edgewood Monday.

The Tiger Cubs utilized a balanced attack in the first half to score two goals and take control. Head coach Scott Weltz acknowledged that spacing had been an issue, but on Monday the team performed it to perfection.

"We improved on it tonight," Weltz said. "We made a concerted effort at the beginning of the game.

"The goals tonight all came when the spacing was good," he continued. "We had 10 to 12 yards between our players and they could move the ball well and had support. I told them going into the game, 'You can't play as individuals; you have to play as a unit of 11. If you go in and do that, you'll win' and they did."

Greencastle got on the board in the first half when Hannah Deer rocketed a shot past Edgewood's Hailey Johnson at the 22:18 mark. GHS went up 2-0 after a goal from Jessie Brown with 17:55 remaining.

The Mustangs came within one as Laura Luther slid a shot past GHS keeper Rachael Winters at 11:50 to keep Edgewood in the game.

After the break, Greencastle's spacing continued improve and they began to attack the goal even more.

GHS had multiple shots on goal and at the 24:59 mark Whitney Brotherton lifted a shot over Johnson to give Greencastle all the cushion they would need at 3-1.

Edgewood was able to add a goal, but GHS held on and took the game 3-2.

Winters was able to come up with some big saves for his team. Weltz acknowledged that Winters has elevated her level of play throughout the season.

"She's improved all year long," Weltz said. "People don't recognize her as a first year keeper and a second year player. They look at her and say 'Wow, she's really making some great saves.' When I tell them that it's her first year in goal, they're very surprised.

"She has developed throughout the year. She has better hands on the ball, more sure of herself, better punts and then coming out and getting those one-on-one stops. You do that early on like she did and they stop doing it. They realize the keeper is going to come out and eat it up."

Up next for Greencastle will be Monrovia on Thursday, then they will set its sights on sectional.

"We're excited to finish, and hopefully build on this momentum and take it into sectional. I told them I want to play six more games, seven more games, instead of two or three. Hopefully we pull it together," he said.

Next game -- Up next for Greencastle will be Monrovia on Thursday, then they will set its sights on sectional.