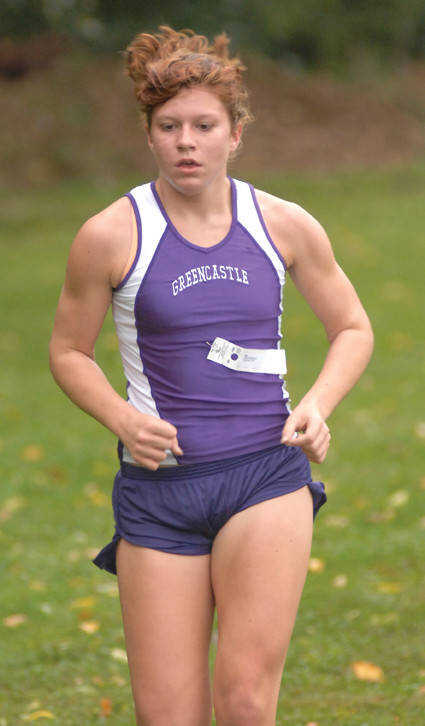 Greencastle's Colleen Weatherford paces herself during the first lap of the 2009 Putnam County meet.

GREENCASTLE --Her last name is iconic, her times are unmistakable and Tuesday night, on the rain-soaked cross country course at South Putnam High School, Colleen Weatherford proved that she is the fastest female runner in the county.

Weatherford won the meet with a blazing time of 21:25, 1:13 faster than the one runner everyone thought would challenge her -- Amilia Nally of Cloverdale, who finished fifth.

The one runner who did challenge Weatherford was her teammate Kayla Cash who finished right behind her at 21:29.

"Our freshmen went one-two," GHS coach Garry Anderson said. "Those two freshmen have been go-getters all season long and Colleen been our No.1 runner all year.

"I was hoping to go one, two, three here, but that didn't happened, but I couldn't ask for anything better," Anderson added.

It wasn't for a lack of trying that the Lady Tiger Cubs didn't finish one, two, three. It was just that Paxton Stephenson was two seconds faster than Emily Gill.

"Paxton did a great job tonight," NPHS coach Kevin Lutes said. "She has been playing volleyball this year too and has not been at practice to be pushed. We had a meet Thursday and she wasn't happy with her time and Cloverdale's No.1 has beaten her the last two times they have raced. So deep down I think her goal was to beat as many people as she can and make the all-county team and she was successful in that."

Greencastle didn't go one, two, three, but they did finish fourth, sixth and seventh, crowning them the county champions with 20 points.

"We gear up for these tournaments this time every year and I can't tell you how many miles these kids put in and the time they put in on their own," Anderson said about his team. "It's just incredible. These kids have some real guts.

"Our top five had great races and our senior Sara Culler, wow, she ran a great race," Anderson said.

"Claudia Monnett finished eighth and that was huge. I don't want to say that was a shock, but she knew what she had to do for the team today," McLaughlin said.

"They ran well today and we had a couple of personal records today," Bye said. "I don't know if the win got to them or what, but they did compete and I'm excited to see what they do in the conference race Saturday."

The Eagles top finisher was Kaelynn Cox, who finished 10th with a time of 24:26.

North Putnam rounded out the team scores with 73 points.

All four county teams are back in action on Saturday when they take part in the West Central Conference meet at South Putnam starting at 10 a.m.

Next Meet -- All four county teams are back in action on Saturday when they take part in the West Central Conference meet at South Putnam starting at 10 a.m.