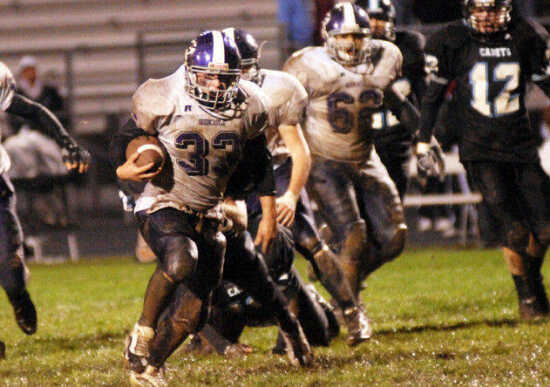 CLAYTON -- It only took the Cascade Cadets two plays to clinch a 14-0 shutout over Greencastle Friday night.

Greencastle made it into the redzone twice and turned the ball over both times. The first was Battin's fumble in the first quarter. The other time was at the tail end of the second quarter after it marched the ball, thanks to Jesse Vermillion, from the 44 yard line to the 13 yard line, only to turn the ball over on downs.

The only other time Greencastle even got close to scoring was half way through the second quarter after Jesse Ford and Vermillion ran the ball for a combined 69 yards in three plays, putting the Tiger Cubs on Cascade's 23-yard line. Three plays later Greencastle turned the ball over on downs.

"We didn't play well and they did. That's all I can say," GHS coach Mike Meyer said.

Ford led the Tiger Cubs offense with 147 yards rushing on 18 carries, while Vermillion chipped in 50 yards on four carries. Keegan Remsburg and Kody Collins led the receivers with 18 yards each.

The Tiger Cubs defense was highlighted by two interceptions, one by Nataniel Velasques and another by Ford. Greencastle held the Cadets to zero passing yards and only 159 offensive yards.

Greencastle is now 1-7 on the season and travels to Owen Valley Friday for it's last regular season game, starting at 7 p.m.

Next game -- Greencastle is now 1-7 on the season and travels to Owen Valley Friday for it's last regular season game, starting at 7 p.m.