By MIKE CLODFELTER, For the Banner Graphic 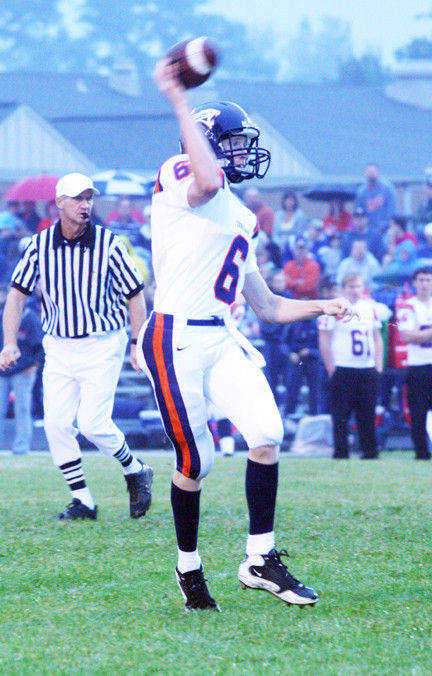 SPEEDWAY -- The North Putnam Cougars football team traveled to Speedway Friday night to play the Sparkplugs, hoping to get back on the winning track after suffering a disappointing loss last week to the Monrovia Bulldogs.

The Cougars played a solid game, accomplishing their goals of improving their play, and getting back in the win column, handily defeating the Sparkplugs, 28-7.

North Putnam struck hard right out of the gate, as Cougar quarterback Kolten Everts ran for a 53-yard touchdown on the Cougars' second offensive play of the game, only to have it called back because of a penalty.

North Putnam was stopped on that drive, but Cougar punter Brock Jones kicked a 42-yard punt to pin Speedway deep in their own territory.

The Cougars defense then forced the Sparkplugs to punt on their next series, and the offense drove the ball 64 yards down the field to score with 3:03 left in the first quarter, with runs by Hank Spencer, Shawn Diebold, Everts, Darr Boruff, with Spencer scoring the touchdown on a one-yard run.

Speedway responded by scoring their only points of the game with 9:08 showing on the clock in the second quarter, but North Putnam would score on their next possession as Everts and Spencer were able to run the ball against the Sparkplugs, and Everts hit Diebold with a big pass play of 33 yards, and Caleb Vondersaar with a 11 yard touchdown pass.

On the Sparkplugs next series, the Cougars forced Speedway to fumble the ball, and an alert Boruff recovered the fumble and ran it in for a 45-yard touchdown.

However, a penalty by the Cougars disallowed the touchdown, but five plays later, Spencer scored his second touchdown on the night with 1:45 left in the first half, and Travis Franklin hit Kyle Adams with a pass for the two-point conversion.

North Putnam took a 22-7 lead into the locker room at halftime.

Neither team was able to score in the third quarter, but the Cougars repeatedly stopped Speedway's offense in the second half, forcing the Sparkplugs to punt or turn the ball over on downs.

With 3:07 left in the game, Everts was able to score the final points of the game on a 39-yard scamper, following outstanding blocking around the left side of the Cougar offensive line.

North Putnam earned the win by making big plays, both on offense and defense, and with their special teams' performance, with punts by Jones for 43 and 47 yards, and by constantly providing pressure on the Speedway punter, forcing short punts averaging 27 yards.

"Speedway's a good team, they've got a great quarterback, and we were glad to get the win tonight," North Putnam head coach Greg Barrett said after the game.

"We fought back tonight, after our loss last week, with consistency and by finishing drives. Last week, we didn't finish those drives, and we paid the price for it."

"I was very pleased with how we played in the first half, and disappointed with our play in the third quarter.

"However, defensively, I thought we played great tonight. We only had a couple of plays where we let up, but other than that, I thought we owned the line of scrimmage."

"Our focus is to get better each week from here on out, and I think we've done that."

"It was a good win, and I'm excited for our players," Barrett concluded.

Everts gained 84 yards on nine carries to lead the Cougars in rushing. Boruff followed with 62 yards on 13 carries, Spencer had 36 on 13 rushes, and Diebold had 23 yards on two carries.

As a team, North Putnam gained 201 rushing yards compared to Speedway's 38 yards on the ground.

The Cougars were 4-for-8 through the air for 57 yards. Quarterback Everts hit Diebold with two passes for 44 yards, and Caleb Vondersaar caught one pass for 11 yards.

Defensively, Caleb Vondersaar, Nate Bryan, and Spencer led the Cougars with six tackles each, and Aaron Vondersaar and Tyler Osborn had five tackles each.

Boruff and Adams each had a quarterback sack.

Finally, Boruff recovered a Speedway fumble for the Cougars.

The Cougars (6-2, 4-1 WCC) host the Cloverdale Clovers in the final regular season game of the season Friday. The Cougars will also be celebrating senior night. The game begins at 7 p.m.

Next Game -- The Cougars (6-2, 4-1 WCC) host the Cloverdale Clovers in the final regular season and WCC game of the season Friday night and the Cougars will also be celebrating Senior night. The game begins at 7:00 p.m.