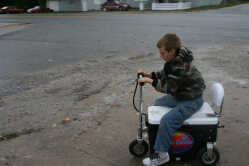 Bradley Buchanan, 10, demonstrates how easy it is to ride a Cruzin Cooler for Becky Martin who recently won it in a raffle.

BAINBRIDGE -- Becky Martin was excited to pick up the prize she won in a raffle sponsored by Buck Motorsports and Country Cork and Cap. Her prize was a "Cruzin Cooler."

And, it is just what it sounds like--a cooler that can be used to cruise around. Mounted on three wheels and runs with either a gas engine or electric battery, the Cruzin Cooler is light and small enough to fit into most trunks.

It was recently featured on the Ellen Degeneres show.

The cooler can hold up to 24 cans of your favorite beverages that can be accessed through a hole on the top of the cooler.

It runs between 10 to 30 miles per hour depending on whether it is using electricity or gasoline.

It comes in multiple colors, includes disc brakes, seat cushion with backrest and a trailer hitch to pull your second cooler behind you.

According to Brad Buchanan, owner of Buck Motorsports, the company that donated the Cruzin Cooler for the raffle, lots of people are using the new item.

"You see them at all the race tracks and people have them to tailgate with," said Buchanan. 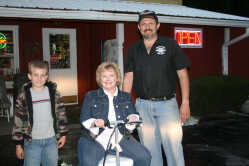 Becky Martin tries out her new Cruzin Cooler won in a raffle sponsored by Brad Buchanan owner of Buck Motorsports and Ed and Sandy Burkley, owners of Country Cork and Cap.

The idea of the raffle was cooked up between Buchanan and Ed and Sandy Burkley, owners of the Country Cork and Cap.

"We thought it would be a fun way to draw attention to our businesses," said Buchanan.

Martin admitted she filled out more than one ticket for the drawing but declined to say how many. She did say she believed a lot of people put a lot more tickets in.

"My son is at IU and I know he will have a ball with it. I think it's pretty cool," she laughed.

He also works on All Terrain Vehicles, motorcycles, jet-skis and snowmobiles.

He is also a dealer for the Cruzin Coolers that range in price from $499 and up.

Buchanan is an engineer and prior to opening his shop in Bainbridge worked for Team Yamaha and Kawasaki.

Buchanan sponsored the raffle along with Ed and Sandy Burkley, owners of the Country Cork and Cap of Bainbridge.

Raffle tickets were sold at the Cork and Cap for two months.

"We would like to thank our customers for ten year of patronage," said the Burkley's.

"This raffle has been a lot of fun," added Buchanan.

Anyone interested in checking out the Cruzin Coolers can stop Buck Motorsports located at 114 W. Pat Rady Way, Bainbridge. Call 522-3600 for more information.