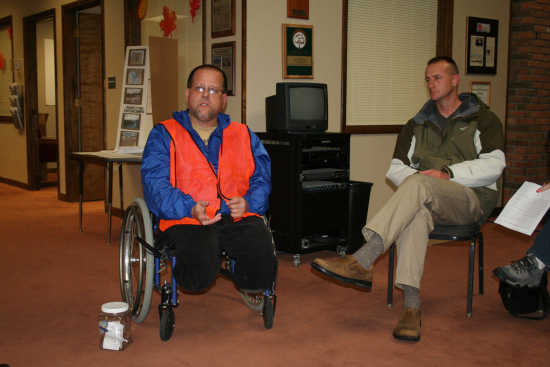 Rain or no rain, the show goes on. On Friday afternoon, Richard Propes made a stop on his 20th annual Tenderness Tour. Proceeds from the tour benefit the Indiana Coalition Against Domestic Violence, New Community Project and Young Peacemaker's Film Project. Propes spoke at Greencastle City Hall about domestic violence, the healing process and his 20 years on the tour. The Walden Inn hosted a meal with Propes later in the evening, and he was hosted overnight by Autumn Glen. Pictured with Propes is Thomas Miller of Autumn Glen. Having traveled more than 3,500 miles in his 20 tours, Propes said this year's ride from Terre Haute to Richmond will be his last. "I cannot model breaking the cycle if the tour becomes physically abusive," he said. To learn more about the tour or to contribute to the cause, visit www.tendernesstour.com