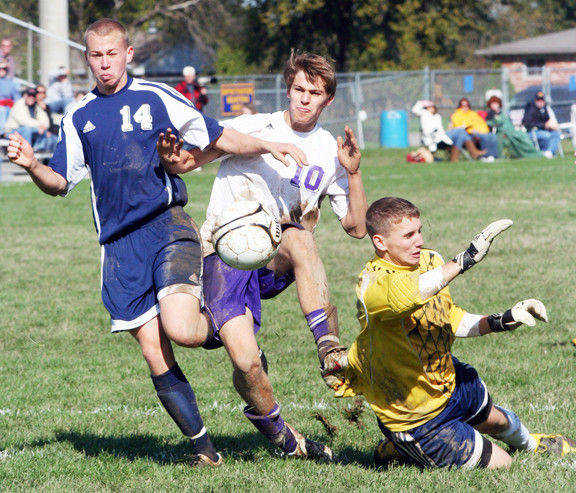 Greencastle's Spencer Moore drives the ball through a pair of Mooresville defenders and scores in the the Tiger Cubs sectional soccer match on Saturday.

MOORESVILLE -- For the Greencastle boys' soccer team, Saturday was an example of the better team not winning the game. The Tiger Cubs had more shots on goal, better positioning, but in the end, not enough goals.

Greencastle fell to the Pioneers 4-3 on penalty kicks, after finishing two overtime periods tied at 2-all.

The two squads took to a pitch that was saturated from two days of constant rain. The elements resulted in slippery conditions that the teams fought against all day.

"The field condition was definitely a factor and both teams had to deal with it, but I felt it neutralized our attack to their benefit," GHS head coach Dave Lilly said.

Mooresville made it clear early that they were going to be physical with the strong, quicker Greencastle team. The Pioneers struck first on a corner kick from Brandon Polson at the 21:20 mark in the first half.

Greencastle was able to respond when the Tiger Cubs' Sonney Basham pounded a goal past Mooresville's keeper to tie the game at 1-all with 9:13 to go.

The two teams entered the break at 1-all.

"We played an outstanding game and really dominated them in the first half," Lilly commented. "It was unfortunate that they scored directly on the corner kick. to take the lead. It was really the only good chance they had in the half."

It looked like the teams were well on their way to a tied finish as the second half wore on. It took almost 30 minutes for the first goal of the half.

At the 11:15 mark, Conor Brown scored off an assist from Josh Morning to put the host Pioneers up 2-1. It was a cushion that was erased four minutes later.

Greencastle scoring threat Spencer Moore had been kept quiet for most of the game, but when his team needed him most, the junior came through. Moore took the ball just past midfield and sliced down the middle with his sights set firmly on the Mooresville keeper.

Moore penetrated, drawing the keeper out and rocketed a shot to the back of the net at the 7:38 mark to tie the game 2-all and eventually send it to overtime.

Following two seven-minute overtime periods, the contest was still not decided. The teams met at midfield for the coin toss for who would go first for penalty kicks. GHS won and chose to go second.

After four kicks, team found themselves in a familiar position -- tied at 3-all. Morning put Mooresville up 4-3 when he sent a kick just right of GHS keeper Kyle Parker. The Tiger Cub's final shot came from junior J.T. Hennette. He sized up the Pioneer's keeper and connected on his shot; unfortunately, the keeper was able to deflect it to preserve a 4-3 win on penalty kicks.

Lilly commented following the contest that he felt his team did better on penalty kicks that they did during the regular season against Speedway, but still came up one short. He also noted that is was hard to end a season when the team has accomplished so much, but knows that next year could be something special too.

"It's always disappointing to end the season when you feel there is more to be accomplished," Lilly commented. "But we had another great year, had some fun and might have set a record for the fewest goals allowed.

"The seniors will be missed, but we have a strong group of guys returning next year and hopefully learned some things that will make us better next year," Lilly concluded.